Jasper Cillessen is a Netherlands international goalkeeper who is currently moving towards Spanish Champion Barcelona from Dutch club Ajax. He started to play with Ajax in 27th August, 2011 where he signed a five years contract in exchange for €3 million fee reportedly. Now, his agreement period is almost come to an end and in the meantime he is recruited by Barca. But the transfer has not completed yet and the stopper hopes that it will be finished within two or three days. 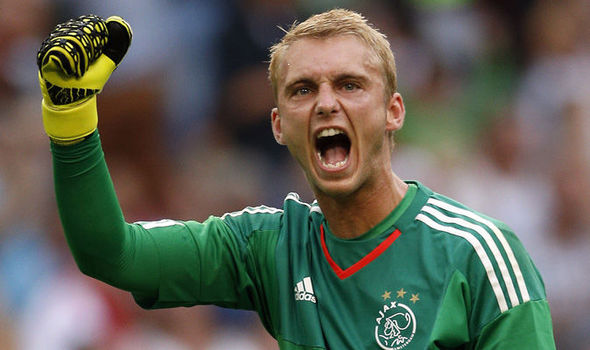 Basically, Barcelona needs a goalkeeper because their regular Chilean stopper is heading for Manchester City this summer. He is the top goalkeeper in Barcelona but this season Barca coach Luis Enrique has selected German player Marc Andre ter Stegen for the first team stopper and Bravo would not like to be 2nd in position and thinks it is better to leave the Camp Nou where he arrived there in 18th June, 2014 with four years duration and the transfer fee was €12 million which was the fourth highest for Real Sociedad.

Now, where he has already decided to leave Camp Nou and headed for English club Manchester City, so, Barca is needed to find a alternative for him and they have succeeded. Dutch international is their first choice and he is about to come where the transfer from Ajax is a final stage.

According to the news, his transfer fee would be approximately €12 million and this 27 years old has stated that he will fly to Barcelona within couple of days to finish final procedure. Then he will have to complete medical test and some other formalities. Besides, he also has revealed that it would be so much competitive matter to play with the Catalan club due to presence of German footballer ter Stegen. He would be the Enrique’s first choice but Jasper Cillessen would very much like to receive the challenge. He also familiar with this such kinds of activities where he faced the same condition in his previous club and he won.

By analyzing all the possibilities, the Dutchman has realised that Barca usually play more than 60 matches in every season which will be more than his former club. So, it would perhaps he can get opportunity to play more games with the Catalan club.

27 years old Dutch player, started his career with NEC in 2010 where he made 34 appearance and later in 2011, he joined Ajax. By spending four consecutive seasons with them, he made 101 appearances.