Alvaro Borja Morata Martin is a Spanish national football team players who is currently played for the Italian club Juventus as a striker. Before Juve, he also played for the clubs Atletico Madrid, Getafe and Real Madrid. Is the last season of Juventus, he has scored seven (7) goals with 34 appearances and for national team, he has played 3 apps and scored 2 goals.

This Spanish national team striker joined in Juve from Real Madrid since 2014 in exchange for €20 million where he won Coppa Italia and domestic double of Serie A. At the end of the deal in Juventus of Alvaro Morata, Antonio Conte which is the current manager of Chelsea wants him to join in Chelsea. But at the same time, the former club of Morata, Real Madrid also wants him with buy back clause of £23 million which can be extended to £40 million. That will be a healthy profit for Morata. 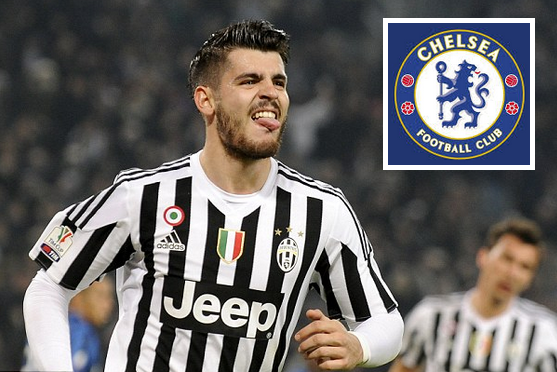 In 2014, when Morata was signed by Juve rather than Lukaku, he is just the another player who is wanted by Conte to pursue this summer due to the reason for his brilliant performance where he scored 27 goals.

On the other hand, this Spanish forward has shown his color in Juve as well as RM, so, Conte understand that he will not come cheap. The situation is matted when Spanish Madrid has offered him £40 to rejoin their camp. No doubt, the Blue are easily meet this such kind of demands of £40m but the fact is, would Morata give Chelsea the test of Victory?

Chelsea is currently standing in 10th position in Premier League point table at the end of 2015/16 season. They are also the four times Premier League champion. Last they won Premier League in 2014/15 but their recent performance is not well enough. Last season, they totally played 38 matches in Premier League where they won only 12 and lost 12. Rest 14 matches were drawn. They are suffering from good attacker actually. So, their current team manager Italian Antonio Conte are seeking for talented striker. He has found one named Spanish Alvaro Morata and desperate to deal with him.

However, Morata hopes that everything will be alright before UEFA Euro 2016. He also wants to rejoin in Real Madrid but he knows that RM still have many good players. He also conscious about the offer from English club Chelsea. It seems that Premier League would probably be a great place to lean. He also adds that he wants to learns from the best.