English Premier League title holders Chelsea who are currently at the 3rd position in the league table, just behind the Manchester clubs, have secured their 4th victory of the campaign against an out of form Stoke City side and they actually blasted the oppositions in their own backyard. The Blues made a trip to the Britannia Stadium to face the Potters in an important league clash and they successfully went back home with their desired 3 points from the fixture. 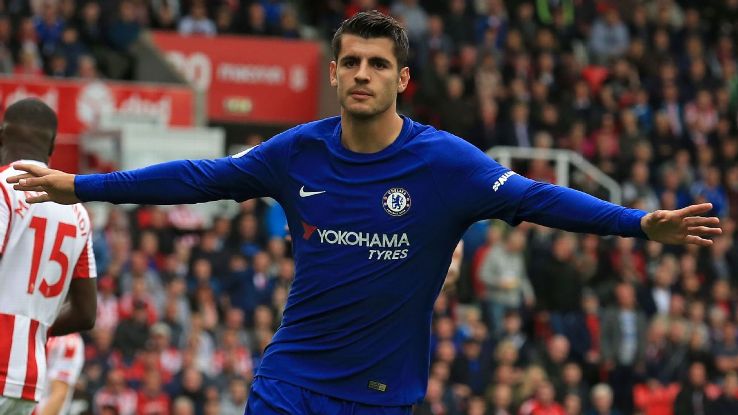 Antonio Conte’s lads actually got the victory smiling. They never faced a bit of pressure in that game. Alvaro Morata who has recently joined the club from La Liga giants Real Madrid, scored his maiden hat-trick wearing a Chelsea shirt on the Saturday. He opened the scoring on the very second minute of the game and then the title holders never looked back even for a single time. After doubling the lead from a Pedro goal, they secured a massive 4 nil victory as Morata wasn’t pleased with a single goal and went up further to score two more goals and his second half brace completes the hat-trick for the Spain international and he and his fans would be certainly relieved and pleased with his recent forms.

Blues’ Belgian sensation Eden Hazard, who is yet to get a premier league start this season, was once again named in the substitutes list and replaced Brazilian winger Willian on the 72nd minute to appear to the pitch. The regular captain of the Chelsea side, English defender Gary Cahill, too didn’t start and featured only in the second half as he came on to the pitch by replacing Spanish full back Marcos Alonso on the 59th minute. The hat-trick hero against the Nottingham Forest Michy Batshuayi didn’t get a game on the day.

The 24 years old who will turn 25 in the next month, has joined Man City’s Argentine star Sergio aguero and Man United’s Belgian sensation Romelu Lukaku, in the EPL top scorers’ list as the each of the trio has scored 6 goals so far in the competition. His sublime hat-trick has let him sit in a honourable position. So it is going to be a cracker of a contest between the in form striking duo when the Blues will host the league leader Man City in their very next EPL game in the upcoming weekend. So only time can answer that who will come out on the top, former Los Blancos Alvaro Morata or former Atletico man Sergio Aguero.