Andrea Dovizioso achieves back to back MotoGp wins for Ducati as the Italian finished in the very first position in the Catalunya Grand Prix. The 31 years old took just 44 minutes 41 seconds to finish in the top position. The Forlimpopoli born man wins his second race within 8 days period as he also finished first in the Italian Grand Prix which was held on the first week of the June where he took no more than 41 minutes 32 seconds. 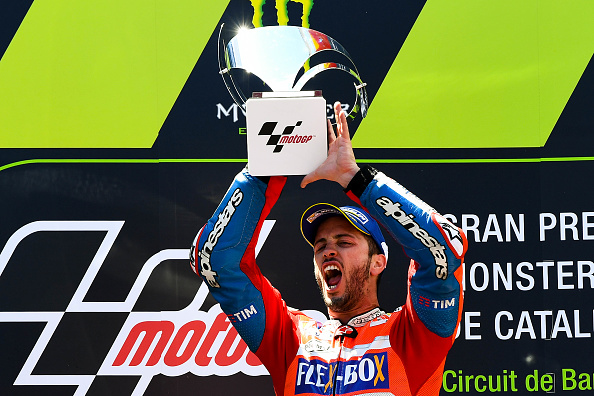 Repsol Honda team mates the Spanish duo Marc Marquez and Dani Pedrosa finished in the 2nd and 3rd position respectively. Another Ducati man Jorge Lorenzo ended up being 4th in the competition. The Spaniard needed a time of 41 mins 51 secs. Monster Yamaha’s duo French man Johann Zarco and German Jonas Folger ended in the 5th and 6th place. Alvaro Bautista earned the 7th position and was followed by Valentino Rossi, who finished in the 8th position. Hector Barbera and Maverick Vinales, another Spanish duo sealed the 9th and 10th spot.

World Championship leader Maverick Vinales disappointed as he ended in the 10th that has kept him only 7 points clear from Dovizioso. So the Yamaha man won’t be pleased with his performances. The race had a horrible start as Danilo Petrucci and Marquez were involved in an accident. It was investigated by race direction. Petrucci fell from 5th in the closing stages. Bradley Smith unfortunately missed the race with a finger injury. French racer Sylvian Guintoli once again replaced young Rookie Alex Rins at the Suzuki. Petrucci along with Australian Jack Miller and Aleix Espargaro were unable to finish the race. The man from Great Britain Sam Lowes finished in the last position taking 45 minutes 37 seconds. Although Aleix couldn’t finish but his younger brother Pol Esapragaro ended in the 18th place who represented the Red Bull.

Dovizioso has stuck with Ducati since 2013 and with the Bike number 04, he hadn’t won a single race in his first 3 years but after winning his very first one with Ducati in the 2016, he has won two races out of his 7 appearances. He is currently now in the second ranking, just behind Vinales.