Watford midfielder Roberto Pereyra was sent off during his team’s clash against West Brom. On the Saturday afternoon at the Hawthorns, Pereyra was involved in a contention with West Brom’s Irish winger James McClean. The Argentine was forced to leave the field on the 84th minute as the referee Graham Scott showed him a red card.

The former Juventus midfielder was shown a red card as well as handed 3 match suspension. The FA previously suspended him for 3 matches. He was set to miss 3 consecutive premier clashes against Everton, Manchester City & Sunderland. But Watford appealed immediately. Watford demanded that their midfielder was innocent at the incident & shouldn’t be punished. Watford’s this appeal was rejected but FA reconsidered the appeal of excessive punishment which was given to player, appealed by his club & the FA reduced the suspension. They published a statement which revealed that the 25 years old’s punishment was reduced as his suspension of 3 matches was decreased to only 1 match after following an Independent Regulatory Commission hearing. The statement also revealed that the club’s appeal for dismissing the player’s ban completely, was rejected as the player found guilty in the fact. 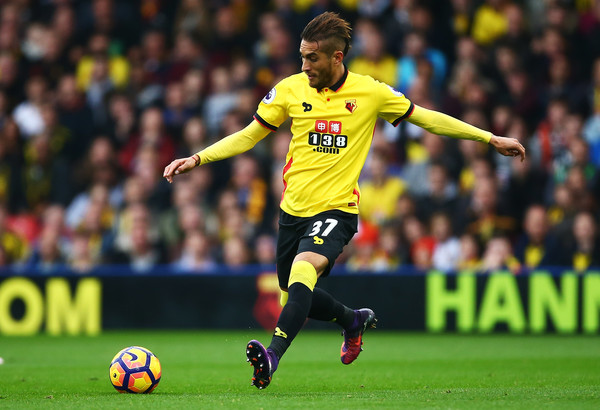 Roberto Pereyra will now miss the premier league home clash against Marseyside Blues, Everton on December 10 at the Vicarage road. But the 25 years old will be available to the trips to Etihad & Stadium of Light against Manchester City & Sunderland respectively on December 14 and December 17.

On Saturday night, West Bromwich Albion came victorious over visitor Watford at the Hawthorns. Tony Pulis’ side won it 3-1. Northern Ireland international Jonny Evans opened the scoring for the hosts at the 16th minute. It was the first league goal of the season for the former Man Utd defender. Chris Brunt doubled the lead on the 34th minute. Christian Kabasele gave one back on the 60th minute & the visitors had some hopes. But Matt Phillips sealed it for the hosts at the closing minutes.

Walter Mazzarri’s side is currently on the 11th position in the league table with 18 points from the first 14 premier league games. On the contrary, West Brom is currently in the 7th position having 20 points with the same number of matches. The former River Plate midfielder has scored 2 goals for the Hornets this season after he signed for them from Juventus, earlier this season. The young Argentine appeared in 66 matches for the Bianconeris and netted 6 times for the current Serie-A champions before heading to Watford.