Argentina again lost their place in the FIFA ranking. Now they are existing in the 5th position so far. Argentina broke the 6-1 win against Spain and reached the biggest defeat in their football history. After losing the match they one step back from their past position.

On Tuesday, Diego Costa and Isca scored in Madrid 2-0 in the 27th minute Argentina left behind of the competition. Shortly before the break, Nicolas Otamendi expected to return to the match after the interval, the guests awoke.

However, Argentina could not make minimum resistance in the second half. The hatchet meets Escrow and once the ball is sent to the Yago Aspas and the Thiago Alcatenta. 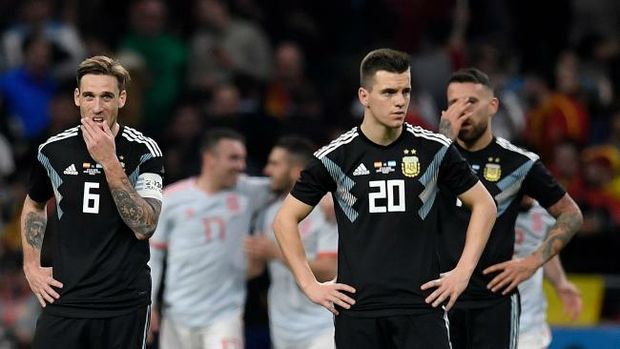 Earlier, Sampaoli’s team had lost five goals in the 2010 World Cup qualifying. They lost in Bolivia field to 6-1. In 1958, the South American country was defeated by Czechoslovakia in the same position. On the other hand, Spain got their biggest win against any team in the World Cup.

However, Brazil can not cross the world champions at the top of the FIFA rankings even if they beat Germany in a friendly match. Tite’s team being existing in the second place as before. And Argentina gets one step back then before.

The ranking yet not published officially. According to reports the biggest organization of football will be officially announced the ranking on 12th April.

Germany, with 1-0 defeat at home on Tuesday night, have been reached on top of list from the past eight months.

None other than these two teams were at the top 13 months ago. Argentina topped the position in 2017. Sampauli’s team lost by 6-1 score against Spain on Tuesday night and dropped to one step behind from before and exist in fifth position.

This is the first time since 2014, the 1986 World Cup winner Argentina had gone out from top four place. It is really horrible for Messi’s team.

Portugal will also be down. The European champions, who lost 3-0 to the Netherlands on Monday night, will move down one step and reached in the fourth position. Belgium being the third place by losing 4-0 to Saudi Arabia.

Switzerland having sixth position and France in the seventh. Spain, with a big margin against Argentina, will move back to the eighth position. Chile will move one step further to ninth place. Poland is at the 10th place behind the four steps.

Here, the Top 10 of FIFA Rankings in below