Argentina captain Javier Mascherano has jumped Barcelona to Chinese Super League club Hebei China. Hebei reportedly announced that the star officially joined the Chinese side by left behind La Liga club.  According to reports the midfielder will wear No. 14  jersey in the new club. The head coach the star will bring the team in new level of height and they warmly welcome him.

However, Barcelona arranging a farewell ceremony for the Argentine defensive midfielder on Wednesday. The 33 years old has spent eight years with the Catalan giant. And that’s why the team wanted to give him a grad farewell. 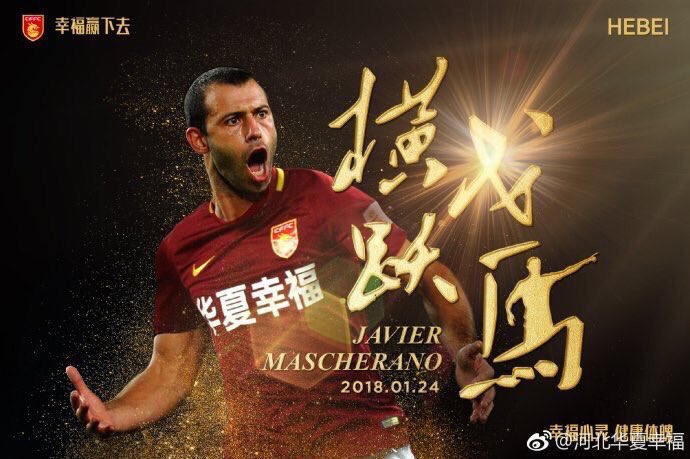 That means Mascherano not only changed his long time veteran club also the league of football. When it was asked to the captain he replied with that he being not the player what he was. His performance getting lower and that is the reality. By accepting the reality the defender gave reign from the post.

The 33 years old thinks that the ability for the centre-backs of the team Barca being so high and he had not have the quality. And that’s why he took the decision because he had not wanted to put the side  in a stiff position.

However, this is a good decision and we respect his thought. Actually after passing time the midfielder losing his importance in the side and the things getting so difficult for him. And he felt the need of changing. So he joined the Chinese side.

Mascherano joined the Catalan side in 2010 by leaving Liverpool for the transfer clause £17 million. With the side the defender has won 18 trophies. Here is not end, he also won two Champions Leagues title alsong with two four La Liga titles.

The 33 years old man not happy at all to leave the side. Actually it was very difficult for him. That was the club where he gathered experienced and felt proud being the part of the side since a long time.

Barca President Josep Maria Bartomeu happy for Mascherano. He thanked the defender for everything that he had given the Catalan side. Joseph also wished him to take a new challenge but the president said for the guy Mascherano who left the club forever.  Finally Bartomeu assured the talented guy that he could return the side if he want and he door of the club will be open for him in ever.

Mascherano will retired from international duty After the World Cup. So it will be a big challenge for him to play for properly new side.