Argentina boss Jorge Sampaoli was questioned of any rift with their star player Lionel Messi. But, he totally denies of any possibility of rift between him and the superstar Lionel Messi.

Barcelona forward Lionel Messi, who is the captain of this Argentina side is the most important and valuable player of Argentina right now. And the whole nation is looking up on him as Argentina are now currently in such a situation that they can not afford to lose one more point and if they do then they could be out of the World cup 2018.

A 2-2 draw against the bottom most team of the group Venezuela has seen Argentina still occupied the 5th position of the South American zone’s world cup qualification group. But, it is not certain that they could end their campaign remaining at the 5th position or not. They have two more games left ahead of them against Peru and Venezuela. They can not go for the automatic qualification now as they can not finish at the top four they have to go for the play off. 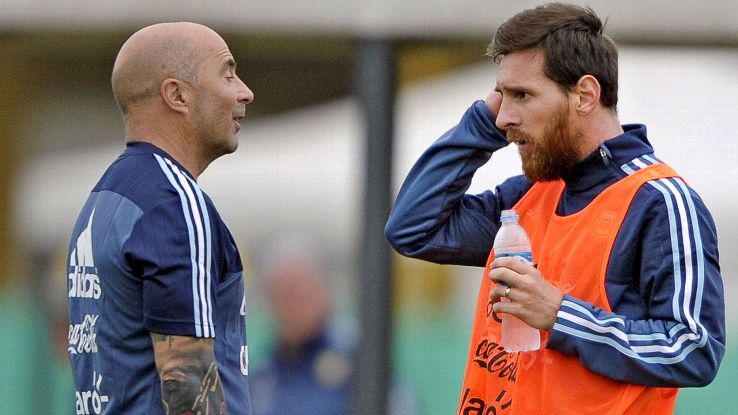 Whatever, earlier there was some news of some disagreement between coach Jorge Sampaoli and the key most player Lionel Messi. But, Jorge Sampaoli has denied the rumor from the root as he said in a press conference before the match against Venezuela that, now the time is not going in their way and people start to spread this kind of rumors. He assures that, this are only rumors and there is no truth in them and he also confirms that these rumors are being spread to undermine the moral of the team.

He confirmed that these news reports of growing a rift between him and Messi is entirely false as there are many more statements.

He said that, nowadays the people are living in such an world where a lie becomes truth when it is told for a thousand times. And he also threw some hate to the force who want Argentina out of the world cup and he don’t want to give these rumors any value as he thinks that will be shameful to do so.

He also says that they are very much lucky to have the best player of the world in their team who would sacrifice anything to take his team to the world cup. He also stated that he does not want to hear those types of questions any more as they are irritating for him as well as for the team.

However, Sampaoli admitted that Argentina are suffering from a dependency on Messi, which should be removed immediately.