Argentina downfall against Nigerian in the World Cup preparation. In the beginning of the match Argentina went ahead by two goals. But the two time world champions could not make any resistance against Nigeria who have back in the game after the second half of the tournament.

Barca star Lionel Messi was absent in the game and his absence fall the team of 4-2 score. Sampaoli’s team reached the main tournament very toughly and  in the preparation match for the World Cup, they lost badly.

Ever Banega and Sergio Aguero’s goal left behind the team Nigeria but   Brian Your return the game in their favor before the break. 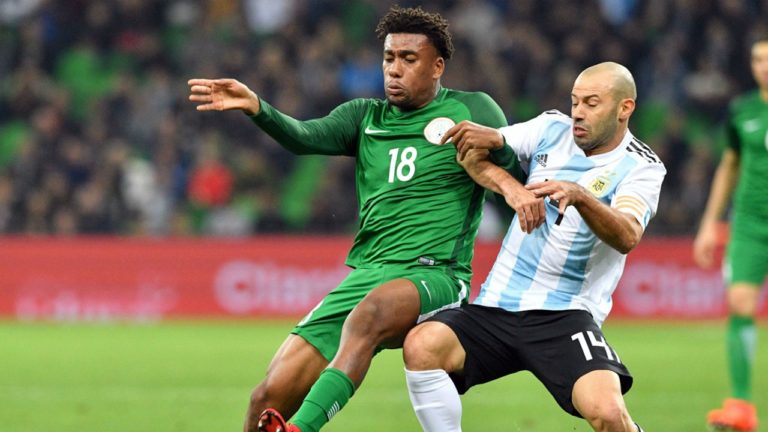 Goalkeeper Daniel Skypie make a mistake and Ever Banega took the advantage of the mistake and in the 27th minute the forward kick a goal and take the team in ahead. Acid Yee gets the ball by hand just outside of the D-box and Argentina gets free-kick. Severe midfielder sent the ball to the net with a great shot.

After progressing, Messi’s team who became aggressive, doubled the gap in the 36th minute. On the right side, Cristian Pavon got the cross from the six yard box and made it to the goal of Aguero.

Last Saturday, Aguero made a winning goal against Russia  which crossed the limit of Diego Maradona’s goal record in ever Argentina’s history list. Now the guys sit down beside Hernan Crespo at third place. The Manchester United striker, who is now the third player to score 36 goals.

In the 44th minute, Leicester City forward In Chincho reduced the gap to a nice free-kick. The goalkeeper Agustin Merseyside could not stop despite of tried his heart and soul.

In the second half the game has seen to change magically. Only difference of two minutes, the ball goes through the net twice and Nigeria return to the game. Brian Aidou, kicked a goal very smoothly and the score difference embarked as 3-2. The changing blow have seen to all and it was very exciting.

The IOB’s second goal in the 73rd minute ended the hope of Argentina to return in the game. The Arsenal forward made the goal very confidently. It was delicious when he kick through the ball into net and the crowed shouted it’s goal.

Argentina played seven times Against Nigeria, before the preparation match. In before Argentina lost in 2011 WC championship which result emerged as 4-1 score.  The remaining six matches grabbed by Two time champion Argentina. This being the second win of Nigeria against Argentina.