Japanese young striker Takuma Asano who is also called Japanese jaguar has successfully joined with the Gunners. The official announcement is made in 3rd July, 2016. It is the 2nd signing of Arsenal in this season.

Japanese national team football player Takuma Asano made his club debut with Sanfrecce Hiroshima in J1 League club in 2013 when he was only 18. He played there three season as a striker. There he totally made 57 appearance till 2016 and scored 11 goals so far. During his time in Japanese club, he won J1 League in twice in 2013 and 2015 along with three times Japanese Super Cup in 2013, 2014 and 2015. In 2015, he was announced Rookie of the Year due to his extraordinary performance. 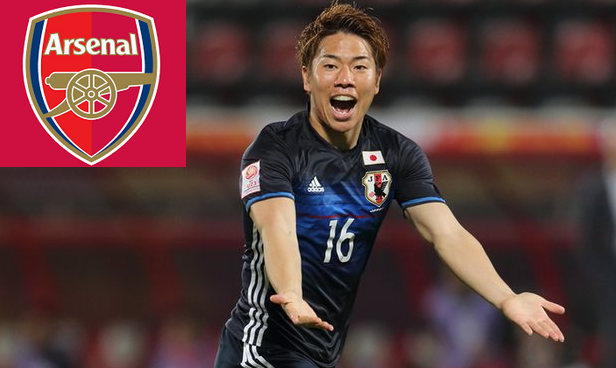 With an impressive start of his career, a large number of clubs were keen of his signature but Arsenal boss Wenger made his decision first.  According to his opinion, this Japanese star is very talented young forward and have capability to do better in next. Perhaps, he would have a good future with English giant club Gunners. So, Wenger will try to develop his career within next few years.

This 21 years old Japanese forward is expected to join Rio Olympic 2016 which is going to kick off in next 5th August, 2016 in Brazil. He would probably be the leading goal scorer in this event.

About his joining in Arsenal, he discloses some secrets that he would very much like to play with the Gunners. That would be an option to keep forward. He would learn from them and Wenger would be the great coach to him. So, he feels hundred percent fit and confident to succeed.

Takuma Asano was called for first time by Japan international coach in 7th May, 2015 for only two days training. But he made his debut goal with national team in 3rd June, 2016 where they won against Bulgaria by 7 – 2 goals. Through this, he would give them a prove to his coming. He is now one of the most famous and talkative rising star in Japan.

With his early age, he has made his move to a big English club though, the transfer fee yet not disclosed. Now, he has an opportunity to prove himself in upcoming Premier League 2016/17 season. Also the Gunners boss Arsen Wenger has a faith on him though Takuma Asano was not his first choice. Wenger has chose him where he failed to sign Jamie Vardy from Leicester City.