English giant Arsenal has recently linked with Spanish Isco where Real Madrid are going to sell him. Though, the Gunners have plenty of midfielder but also Wenger wants someone one who would play in both winger and midfield position. Isco seems familiar with it. But first, Wenger wanted to include Mahrez from the Foxes or Julian Draxler from Wolfsburg. But the transfer was remain uncertain. So, he has shifted his move to Spanish Isco who is already putted in market and would probably be the easier option to buy. 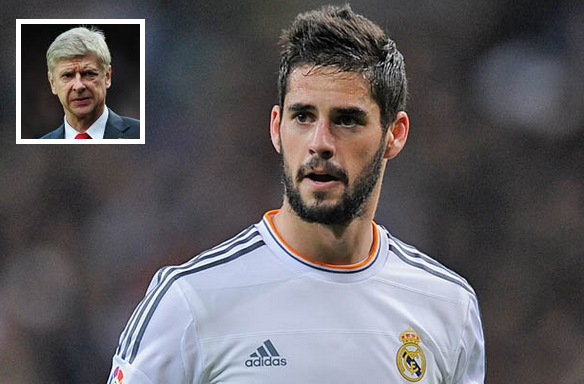 Isco is an attacking midfielder who is playing for Spanish national team since 2013. Till now, he made just 13 appearances with them where netted just once. Though his club performance is too colorful. He is currently under contract with Spanish giant Real Madrid where he joined in 17th June, 2013 with an unknown fee but was believed almost €30 million for five years. He has still two years contract left as per the deal but a recent rumour spread that Real madrid has putted him on transfer market and willing to sell him. And Arsenal boss Wenger is looking for such opportunity and currently making a proposal to stage a bid for him.

Isco has passed three consecutive season with the Blancos which was so tough for him. Though, he was in good form but not so lucky and failed to get permanent with the first team squad. It seems that his playing style was totally different than RM.

After their regular attacking midfielder Mesut Ozil left the RM to the Gunners in 2013, Isco thought that he would be the perfect replacement and get chance in regular squad but in the meantime Colombian James Rodriguez joined at the Santiago Bernabeu and took the opportunity from him. So, he just found limited opportunity to play.

Though, since the joining at the Santiago Bernabeu in 2013, he made till now 149 appearances in all competitions where most of them played as a substitute. While playing such amount of matches, he scored 22 goals along with 35 assistance. It seems a very good figure but considering three years performances, it is so poor. Considering such poor opportunity, along with Real Madrid, Isco also is willing to leave the club for good chance and Arsenal is one of the best options to him, it seems.

Isco started his career with Valencia and there only made 4 appearances. Later he shifted to Malaga where he stayed two consecutive season and played 69 appearances and netted 14th times. RM was his third club and now he is looking forward to join fourth.