Arsenal fans’ waiting for Hector Bellerin might be over as the defender could return to the squad for this weekend’s home game against Stoke City. The full back didn’t take any part after the match against Tottenham where the Gunners drew 1-1 at the home. Bellerin suffered an ankle ligament damage & missed out six games for Arsene Wenger’s side.

The Spaniard right back last played against Tottenham on November 6. Then he missed 3 English Premier League, 2 UEFA Champions League matches and 1 EFL Cup clash. Bellerin was absent against Manchester United where his team drew 1-1 with the Red Devils. Arsenal then won the next 2 EPL matches against Bournemouth & West Ham although their best right back was not available. Bellerin also didn’t feature against PSG & Basel  but Wenger’s soldiers successfully qualified for the round of 16 as the group winner. But his team was knocked out from the EFL Cup as Southampton produced a shock & beat them 2-0 at the Emirtaes. 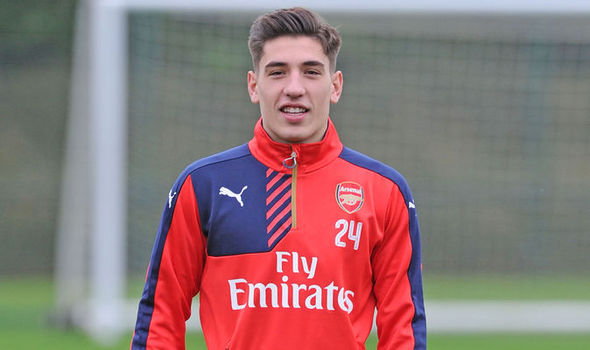 The Experienced One, Arsene Wenger ruled out the Spaniard defender on November 17 & he was absent for the next four weeks. The full back has just signed a new long term contract with the Gunners in November as the expire date of the contract has been increased to 2023. Now he is set to return to the squad on December 10 against Stoke City. But at first he will have to pass a fitness test.

Wenger faced the media on Thursday. Although the French manager was not certain about whether the right back will be fit or not but he also confirmed that a fitness test will happen soon. He also confirmed Francis Coquelin’s comeback as the French midfielder was suspended against Basel.

Arsenal have used three players at the right back position in the absentee of Hector Bellerin. Mathieu Debuchy got injured and Carl Jenkinson lost his form. Centre Back Gabriel Paulista got the chance as well. The Brazilian also played in that position.

Wenger also revealed that Welbeck and Mertesacker are still recovering & just few weeks away to return. The French manager confirms about the successful operation of  Santi Cazorla but also adds that he needs at least 2 more months to play.

The 21 years old signed for the Gunners back in 2013. Since then he had played in 87 competitive games for the North London based club & has become the best choice at the number 2 position for his manager. This season the Spain international has featured in 14 matches so far and done very well on the pitch.