Swiss playmaker Granit Xhaka has recently joined English club Arsenal from German club Borussia Monchengladbach for the sake of £30 million. Based on this transfer, another German defender Per Mertesacker who is currently under contracted with the Gunners stated that Arsenal is the best place for this Swiss midfielder and Mertesacker is very glad to have him in their own team.

23 years old, Granit Xhaka is a Switzerland national team midfielder who has joined the national team in 2011 and his debut match was against England in 4th June, 2011 which was the UEFA Euro 2012 qualification. Since then, he played for Swiss national team totall 44 match where he got 6 international goals. He was selected for UEFA Euro 2016 and played every matches in this Euro 2016 campaign where the inaugural match was against Albania. In that match, he was announced the player of the match. 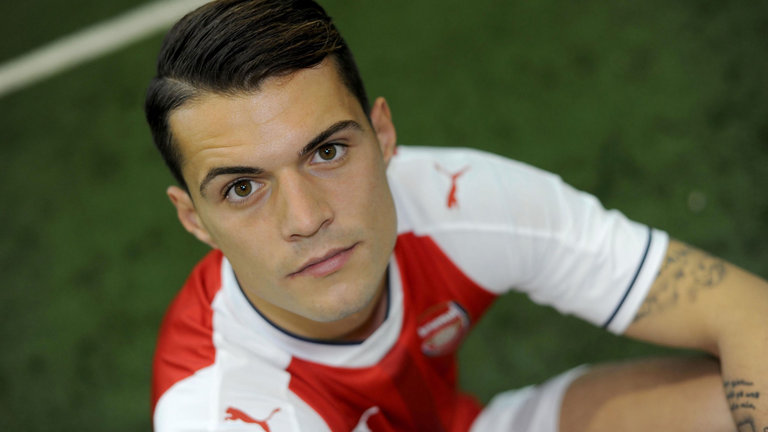 Due to his leading attitude in last UEFA Euro 2016 season, boss of the Gunners Arsene Wenger have taken a necessary steps to recruit him for his team where many clubs were keen to tie him. Granit Xhaka would probably be given a major role to play by Wenger and would be their regular midfielder.

Arsenal is Xhaka’s 3rd club where his journey was stated with team Basel in 2010. He played with them two season. In 18th May, 2012, the news was revealed that he made an agreement with the Borussians for five years where the transfer fee was not announced but to estimated of €8.5 million. His deal with the Borussians will valid till June, 2017 but in the meantime he is recruited by Arsenal where the deal was revealed in 25th May, 2016. He played with Borussia Mönchengladbach 108 appearance and achieved only 6 goals. Basically, Xhaka has scored a few number of goals but assist so much. His passing ability is better than many players. He was given the title of young Schweinsteiger by the Swiss national team manager Ottmar Hitzfeld once.

So, Arsene Wenger is now very happy to bought him and planning something new. As well as his new teammate Mertesacker addresses him the leader especially in midfield. Mertesacker also added that his perform in Borussia Monchengladbach was brilliant. So, Mertesacker would like to see him with their jersey as soon as possible. He would probably be the trump card of the Gunners in midfield whereas he is very good at his short pass. So, he would perhaps helps the Gunners to reclaim the EPL title in upcoming season.