Arsenal play maker Mesut Ozil wanted to buy back his former club Real Madrid in Summer windows. According to German Outlet Bild, he is desperate to rejoin the La Liga giant.

Arsenal has given the winger an extend contract offer which will be ended in 1918 but the 27 years German strongly rejected the offer and wished to jump his veteran side again.

He mentioned that he wanted to leave the London club and willing to be signed any Real Madrid offer this Summer.

Speaking on the interview Ozil is told that he has spent the time with happy in London but his target is now something bigger. He would to like somewhat major trophies and championship which is lacked in Gunners side. He knows his dream could be true only the Vikings side. 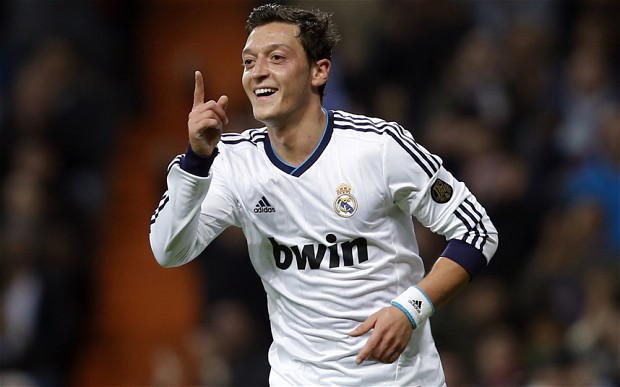 Ozil joined the Los Blancos ahead of the 2010-11 campaign from Werder Bremen. He finished the season with 25 assists and became a very tallented attacking midfielder of the year. The year 2013 the playmaker left Real Madrid and joined the Gunner side.

Real Madrid denied to raise his salary and Ozil father and agent Mustafa Ozil decided to sell him in the other side. At last the Whites sold him to Arsenal and he wanted to back his former side.

Few weeks ago the plamaker mentioned he would not want to leave the club and soon going to sign a new contract with the Gunners. He also termed that he would stay there till the club wanted him in their side.

Not only that, he also rejected Real coach Zidane’s offer, who wanted to buy back the winger in Summer windows. But now the playmaker wished to rejoin the La Liga club, if he got any offer  this Summer. would reportedly snap up the chance to head back to the Bernabeu if he was offered it in the near future.

Arsenal are not interested to sell the most talented this Summer. If the play maker leave the club, they will need another good one. The Gunner are also battle to nexus Alexis Sanchez ahead of the Nou Camp.

Arsenal only the football club who will buy just one forward this season. The Ozil deal yet not completed. Actually the German professional wanted to ponder his desire before pledging his future to the Gunners. Mesut hopes that he will be the lame business of the Los Blancos. So let’s see what happen, to get more news linked with us.