Arsenal striker Olivier Giroud suffers a thigh injury during his international duty for France against Wales on the Friday night. The Les Bleus front man was named in the starting line up by his national team manager Didier Deschamps and had a good game as he put his name on the score sheet as well as his country marched to the victory. On the Friday night, the France national football team hosted the Wales national team at the Stade de France at the Saint-Denis. French head coach Deschamps named a frightening attacking line up which was consisted off Antoine Griezmann, Olivier Giroud at the very front with the likes of Kingsley Coman and Kylian Mbappe just behind them at the wings. 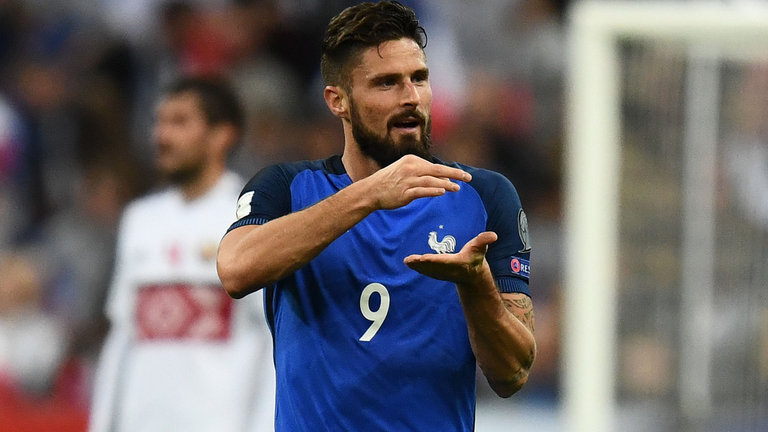 The 31 years old striker who has just scored 3 goals so far for the Gunners this season, started and was one of the contributors to take his team to the victory. After Griezmann’s day opener, Giroud sealed the deal in style on the 71st minute. But he in the very next minute, he suffered an injury in his right thigh and was substituted by Man Utd forward Anthony Martial. FFF (French Football Federation) stated that, the striker will miss their next international friendly against world champion Germany on the Tuesday.

The 6 feet 4 inch tall footballer has returned to London to join his club, following his injury which has ruled him out of the upcoming Germany clash. It was his 29th goal for the France national team and he has surpassed Yuri Djorkaeff’s stat with whom he used to be the joint 7th highest goal scorer for the Les Bleus. Now he stands alone at the number 7 spot just behind Thierry Henry, Michel Platini, David Trezeguet, Zinedin Zidane, Just Fontaine and Jean Pierre Papin. He needs 23 more goals to surpass another Arsenal legend Thierry Henry who holds the record with 51 international goals for his country.

This news will not be treated well at the Arsenal as the Gunners have been scheduled to host their city rival Tottenham at the Emirates Stadium in a lunch time Premier League clash on the next Saturday. Although the former Montpellier man hasn’t been a regular face in the Arsene Wenger’s first xi this season since the joining of his compatriot Alexandre Lacazette from Lyon, it will still be a bad news for the North London based club as Giroud has the ability to change the game within a few moment.