The mid week mania of the English Premier League has been disappointing for the giants so far. All the giants were in action on the cold Tuesday night except the two Manchester giants. But none of the favourites could manage all 3 points from their fixtures. The likes of Tottenham, Chelsea and Liverpool all drew. The Saints of Southampton were handed a defeat at the Liberty Stadium. But after all those incidents the biggest headline of the day was the Gunners’ shocking defeat at the home. With almost no one having seen it coming, Arsene Wenger’s lads have surprisingly tasted their 2nd downfall at the Emirates this season which is also the very first in the league after their opening day defeat against the All Reds at the North London. 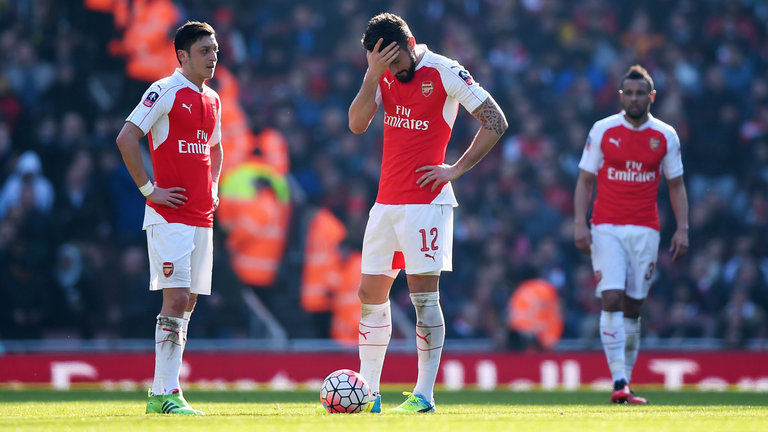 Arsenal hosted Watford on the Tuesday night. The Gunners were flying high after beating Southampton 5-0 away from home in their latest fixture in the FA Cup 4th round and a comprehensive victory was expected for hosts. But an absolute shocker was waiting for the Gunner fans. The visitors got a flying start after English midfielder Tom Cleverley opened the scoring on the 10th minute. It is the maiden goal for the former Man Utd midfielder in a Watford shirt this season. The last time the 27 years old netted for the Hornets was back in 2009-10 season on his senior team debut season. He struck 11 times in that campaign.

The Hornets were too good to get into the driving seat of the game and Troy Deeney doubled the lead just 3 minutes later. It was the 6th goal of the season for the 28 years old attacker. Last season he had put his name 15 times on the score sheet. Conceding two early goals put the home side under pressure and they needed to hit back at their opposition soon. The first half finished with 2-0 advantage for the touring side.

In the second half young winger Alex Iwobi put one back to the opposition’s net on the 58th minute. It was the 4th of the season for the 20 years old attacker. The assist was provided by Chilean superstar Alexis Sanchez. But it was still not enough to prevent the defeat for the Gunners as they failed to level the line as no more goals were scored after that.

Arsene Wenger’s team currently sitting at the 3rd position in the league ladder with 47 points from the first 23 matches. Watford has now moved to the 13th position with 27 points.