The international break is over and like other popular European leagues, Spanish La Liga is also back on the Saturday with a bang. On the day, which is full of local derbies around the globe, the biggest one would take place at the capital of Spain. At the Estadio Wanda Metropolitano, which is the new home ground of the Los Rojiblancos, Atletico will host their city rivals which is going to be the first Madrid derby of the season. 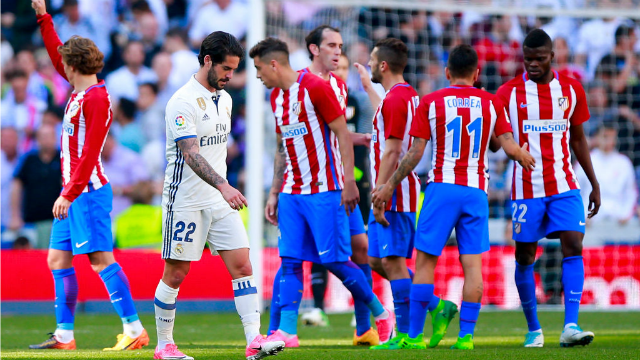 This is going to be a very very tough test for both the sides but specially for the UEFA Champions League title holders Real Madrid, who are still struggling to find their forms and a bad result from this encounter would take them further behind than their lifetime rivals FC Barcelona in the points table. After the first 18 league matches, the Galacticos are already trailing by 8 points with only 23 points beside their name. Atletico occupies the 4th position as they also earned the same number of points as their counter parts.

Los Rojiblancos will be full of power as there is no injury concern for Diego Simeone’s side and the Argentine manager has almost all the options in his hand and is expected to name a very strong starting xi. Jan Oblak will stand between the sticks for the home side. Stefan Savic and Diego Godin are expected to partner at the heart of the defence. Juanfran to occupy the right back position and another full back position would be grabbed by Filipe Luis. Club captain Gabi and Partey are the possible starter at the central defensive midfield. Local boy Koke to play at the number 7 position and in form Saul Niguez will play in the left wing. Angel Correa should start up front along with French talisman Antoine Griezmann.

The visitors might drop their usual number one choice keeper Keylor Navas but the Costa Rican is a man for the big occasions and might just have upper hand ahead of KIko Casilla. The back four should be : Spanish duo Dani Carvajal, Sergio Ramos, young French defender Raphael Varane and Brazilian full back Marcelo. Midfield might be consisted of Luka Modric, Carlos Casemiro and Toni Kroos. Talisman Cristiano Ronaldo will play at the front along with Karim Benzema and Isco would start just behind them. Gareth Bale who has suffered another injury, won’t feature in this encounter and will sit out for another month.