Atletico de Madrid the La Liga giants didn’t get a good start in the league as they have been held by the new comer side Girona in their first game of the season in the Liga BBVA. But the one point which they have managed to earn was really hard fought as they somehow avoided the defeat thanks to the two second half strikes which saw them at least getting something in their way towards home from a tough tour.

Los Rojiblancos are undoubtedly one of the hot favourites in the league and on the contrary their opposition in that match, Girona are just a new side who have been promoted into the highest tier competition of the Spanish football this season. Considering the strengths of the both sides, an easy victory was predicted for the visitors. Very few of us would have thought for anything except Diego Simeone’s side’s win. 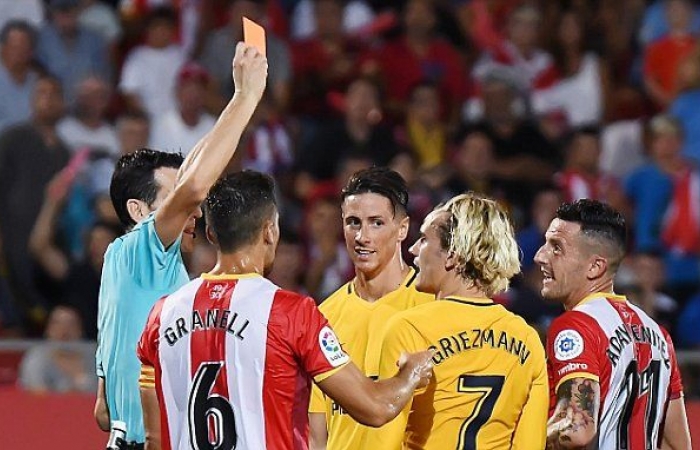 The two clubs came head to head for the very first time in the history and took on each other at the Estadio Montilivi. The team from the Madrid had their first ever visit to Montilivi and their Argentine manager named a strong squad to get a good start to the campaign. Veteran Fernanado Torres was named in the first xi. The former Liverpool forward is 33 but is yet to finish. The likes of Antoine Griezmann, Yannick Carrasco, Koke were available and they all started. Slovenian shot stopper Jan Oblak got the duty to stand between the sticks.

The home side took 22 minutes to get themselves into the pole position as their new signing Christian Stuani opened the scoring to give his side the lead. The Uruguay international didn’t quite stop there and doubled the lead within the next 3 minutes. It was his official debut for his new club and he just stole the spotlight straightway. The 3o years old who will turn 31 in the upcoming October, has joined the Spanish side from English club Middlesbrough. The first half ended with the two goals’ advantage for the hosts. The problem got bigger as the visitors lost their key man Antoine Griezmann as the French sensation was shown a red card on the 67th minute and they were down to 10 men. Angel Correa who replaced Juanfran, made the line 2-1 on the 78th minute. Uruguayan centre half Jose Gimenez levelled the line with just 5 minutes of normal time remaining in the ref’s clock. Both the teams shared a point each.