Atletico Madrid the Spanish giants impressed much as their brilliant display of football has taken them one step closer to the UEFA Champions League Quarter final. Visiting Germany for a football game is always tough but Simeone’s lads made it look easy as they went home with the advantage after a 4-2 win against Bundesliga side Bayer Leverkusen.

Bayer Leverkusen hosted Atletico Madrid in UEFA Champions League round of 16 first leg clash at the Bay Arena on the Tuesday night. The night which was proved to be epic and something special and unforgettable as no less than 14 goals were scored in the two games. Man City stole a 8 goals’ thriller and Atletico grabbed a vital victory. This game was also too much interesting for the fans as no less than 6 goals were scored. 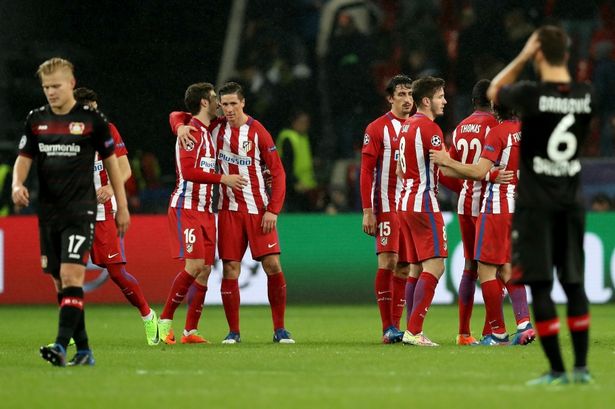 Spanish midfielder, Saul Niguez scored a brilliant and spectacular goal to break the deadlock on the 17th minute to give the visitors an early lead. it was the 5th strike of the season for the 22 years old footballer. He actually stole the show with that beautiful piece of a goal. French super star Antoine Griezmann doubled the lead on the 25th minute of the match and his compatriot Kevin Gameiro provided the assist. It is the 17th goal of the season for the 25 years old who had netted on 32 occasions last season. The first half finished with the 2-0 advantage for the touring side.

German midfielder put one back to the opposition’s net with less than 3 minutes having passed in the second half and made the score card 2-1 with just his 3rd strike of the season. Referee William Collum blown his whistle for an Atletico penalty on the 58th minute and Kevin Gameiro made no mistake to convert the spot kick into the 3rd goal for his team. The in form attacker has already scored 13 goals this season and was hailed by his compatriot Griezmann after the game.

Montenegro defender Stefan Savic unfortunately scored an own goal on the 68th minute of the match and the score card seemed 3-2. But veteran striker Fernando Torres found the net with less than 5 minutes remaining of the normal time to make the score sheet 4-2 on the favour of the Atletico. It was the 7th goal of the campaign for the 32 years old former All Reds forward. The two sides will face each other once again in the second leg which will be played on mid March at the Calderon.