Australia trashed Pakistan and won the first Test. Now the team Australia leading with 1-0 score out of three Test. Back of length ball to bounce. Asad Shafiq came up with the gloves on strike. David Warner caught the ball and gave the ball fly away. It’s look just he threw away the Pakistan’s all hope!

Shafiq was trying to lift an Incredible and unthinkable winning. He was almost success in his mission But finally could not able that. Mitchell Starc fire deliveries had finished heroic five hours fight. Team Australia had not taken so much time to pick the next wicket.

Pak wanted to write the new history of cricket. But could not able to do that. Within 5 balls they lost their last two wickets. Australia won by 39 run and leading the series by 1-0 score out of 3 matches series.

Pakistan trying to chase 490 runs but they all out for 450 runs. They were just a few distance from their goal but unfortunately lost the game. It is Pakistan’s highest fourth innings score as well as the fourth highest scorer in Test history. 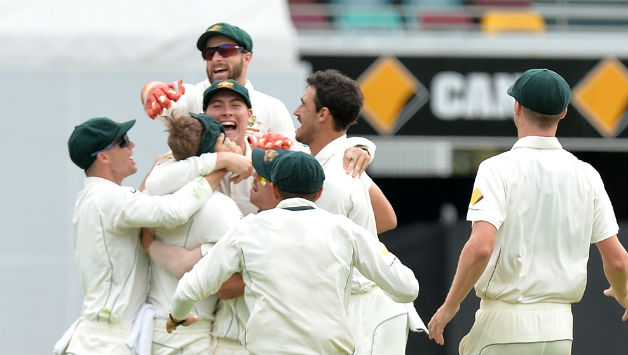 Pakistan won the last Test in Sydney and after that they could not won any matches. This being the 10 consecutive grabbed by Australia.

Pakistan needed 108 runs at the beginning of the end of the day, two wickets for Australia. Shafiq was comfortably ahead of Yasir Shah. One and two runs was coming and often the boundary has come regularly. Shafiq century as well as the previous day, Jesse was very confident.

Pakistan became low down the target score from sixty to fifty.  Australia’s Steven Smith had a clear impression of guilt concerns. At one point, the two main bowlers Starc and Josh Smith was forced to bring a new spell.

Starc did the actual work. He has broken the 71-run great partnership with his outstanding deliveries. Shafiq’s innings of 137 runs in 334 minutes of not being able to turn big depression.

The same over the direct throw finished Yasir in a run out by Smith. And at one time it was on track to win in Australia. Pakistan lost 6 wickets for 0 runs. Pakistan could not able to grab the victory because it was not until the end of Shafiq. With the goal of once again Australia saved to taste an embarrassing loss .

Though Pakistan lost the game, Shafiq recognized as man match of first Test.. That becomes apparent massiveness of his innings.