Bangladesh T20 captain Mushfiqur Rahim returned from hospital. According to report he is absolutely fine and there has nothing to worry about his health. Doctors confirmed that he is free from all kind of danger.

Bangladesh were playing the second innings and the accident happen in the 43rd over. Tim Southee took the ball round the wicket with pointing body. Mushfique did not understand the attack properly. At the last moment he just closed his eyes and the ball hit the bottom at the back of the helmet.

When it hit the Helmet the captain fall down and lying near the wickets quite a bit. At last he left the field by Ambulance. However, Mushfiqur Rahim is now out of danger. Bangladesh captain returned to the dressing room after the hospital test. 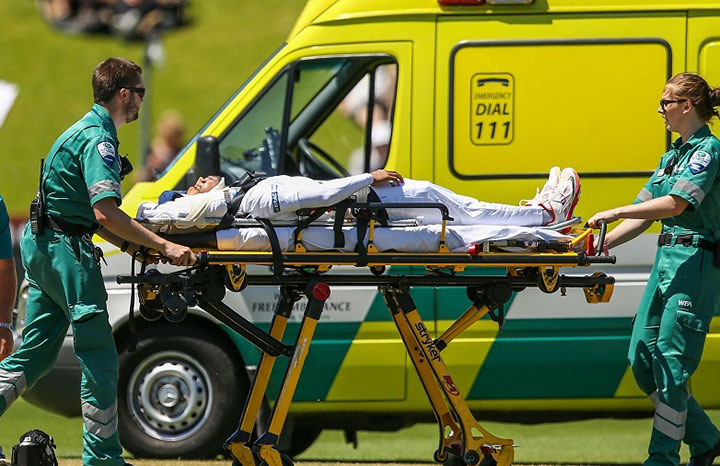 The media manager of the Bangladesh team, rabid Imam went to the hospital with Mushfiqur. He had known about the injured place of Rahim which being the back of head and bottom of the neck. After doing X-rays it has been confirmed that there has nothing to worry about the injury. He is now absolutely fit and fine.

After a while, another round of observation at the hospital, doctors gave up Rahim. They released him after confirm about the injury. If there had anything wrong they would never take any risk with a cricketer.

Mushfiq was not proper fit for the game. He has not came out from the hamstring injury. Finger injuries received at the two hands during batting. With the swelling and pain finger he came out to bat only for the team needed. Bangladesh are very weak on the match. That was the main reason why he continued to fight with all the odds. The bites of these new injury. The ball hit on Helmet and forced him to leave the field.

Mushfiqur fell over for a few time and the New Zealand fielders come run. The physio was given medical treatment some time on the grounds. Tamim rushed outside pitch. After quite a bit is taken out of the ambulance.

Tamim said way back in the dressing room, the injury is not too serious. Rahim is responding well. As a precaution because of a head injury, he was taken to a nearby hospital in Wellington.

Finally it was the great news for the Bangladesh fan that he is out of danger. Possibly he would take part in the next Test.