Mashrafe’s cricket team had been fined for slow over-rate in first ODI against New Zealand. After finishing the Christchurch match on Monday the referee fined against team Bangladesh.

ICC Elite Panel Referee Chris Broad imputed the fine after Bangladesh. The Mash’s team has taken more than the needed. There has a rules from International Cricket Council where they did not give permission to break that. But captain mash take some extra time and that the cause the entire team get the punishment.

Bangladesh lost the match badly. Again the injury of  Mushfiqur Rahim is so worse. At this circumstances Bangladesh team heard another bad news. The first one-day international against New Zealand being fined for slow over-rate whole team. 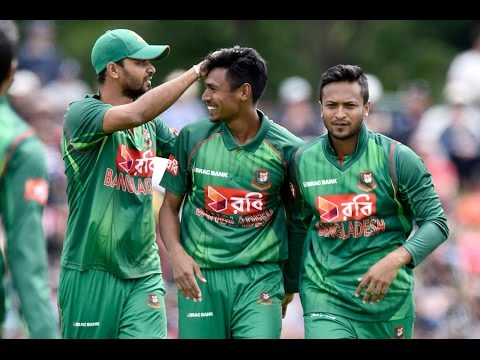 According to ICC rules, if any team fails to bowl in the allotted time, players will find 10% cent of their match fees and the captain is fined double the amount. So now the Bangladesh cricketers have to pay the 10% of their math fees and the Captain Mashrafe pay 20% of it.

On-field umpires and the third umpire after the game referee complaint to accept their own responsibility to Mashrafe. And Mash accepted that without any excused, so it did not need a formal hearing.

It is a small matter, however, not more than the punishment for such crimes. In case of cricket it seemed often happening. Most of the cricket team has faced this offense and paid fine. So nothing to be disappointing.

However, the first day was crush for Bangladesh. Their was a biggest defeat, Against injury and finally the fine. Totally it was very disappointing. In 38th over to take a quick single Mushfique had hamstring pull. To run again in the next over to dive injury. And left the field with physio.

At present Mushfique under observation and put on ice for the time being. Two days later, the situation is understood and send him for scanning.

The year-long international career Mushfique was never to retire for injury. However, this happened twice this year. First happened earlier this year against Zimbabwe which forced him to leave the field. And this year it happened in again against New Zealand.

But the tigers are not disappointing at all. Even they taking preparation for the next match. Mash guiding the boys very much. Now they need without worrying play rock. As they played were batting yesterday. To win against the Black caps they concentrate to check the runs.