The former Bayern Munich boss Pep Guardiola has been linked with a strong move for Ter Stegen and the try has been come since the end of last season.

According to The Daily Express reports that the La Liga club has permitted the goalkeeper to leave the club and join to the premier league side and for that they claimed £67 million fee. 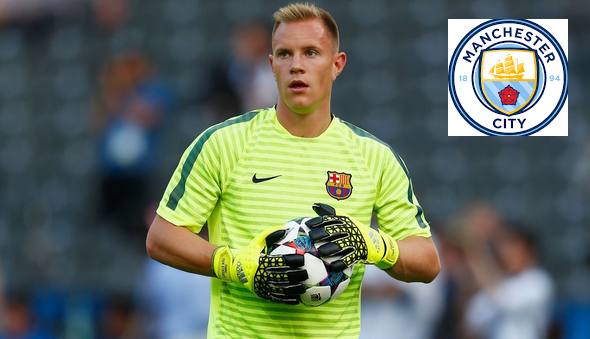 Marc is a German professional national side stopper who joined the Spanish side in 2014 for €12 million transfer fee. He became a very good goalkeeper in the world. His hardworking and mind blowing performance get the team success in many time. For his brilliant job the new City coach very desire to include the 24 years Englishman in their side.

For the monetary arrangement Guardiola decided to sell their veteran goalkeeper Hart to Evertoon who are also desperate to seal the Summer move as soon as possible. Though Hart is a well-played professional goal saver, the Spanish Pep is not satisfied to hart’s performance and distribution so far. And that’s why he wanted to make the switching this Summer.

From a City insider source it has come to know that Hart’s place was definitely under threat in the next season and the new head Pep is looking forward another goal saver.

He also added that Pep wanted someone to come straight in who being good with their feet. Pep took the club responsibility as a big challenge in it’s career since inception.

Guardiola had not been able to use Hart throughout the pre-season and his entire playing out from the back system falls down if he could able to do that.He thought that the English keeper Hart had not the quality of distribution which has been needed by the coach.

Hart Joined the City in 2006 and had made 266 appearances for the side and now his future in City is doubted. Guardiola became the big fan of German stopper Ter Stegen and his first target is Stegen at all. Actually he wanted to rearrange the full squad and according to his plan he wanted to set Juve defender Leonardo Bonucci in the Premier League side. Pep looked so worried for the move. if the deal gonna be done it will be one of the biggest move of city this year.