The Spanish giants Atletico Madrid and Barcelona came head to head in the Copa Del Rey semi final 2016-17 first leg on the Wednesday night where the club from the Madrid hosted the Catalan side. Nowadays the clash between Atletico and Barca is considered one of the biggest attractions in the Spanish football along with El Clasico and The Madrid Derby as too many excitement is seemed among the players, managers, stuffs and the fans in this super hot clash. The two rivals faced each other where both were looking to come out at the top of their opposition. Finally Lionel Messi and his team mates prevailed in this tough away game and will be quite relaxed to face the same opposition in the second leg of the semi final which will be played at their own home ground. 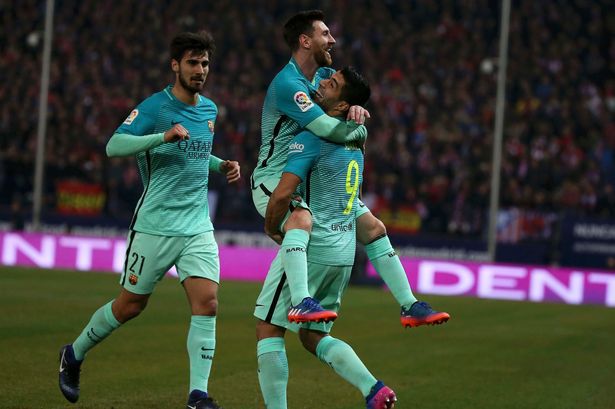 Luis Suarez opened the scoring with just 7 minutes having passed in the ref’s clock to give his team an early lead. The Uruguayan scored a stunning goal as he ran through the strong Atletico defence from the midfield towards the box to finish a cool and calm headed strike which was directed towards the bottom right corner to beat Miguel Angel Moya. It was the 22nd strike of the season for his club for the 29 years old striker. Last season he netted on 53 occasions. The Uruguayan has once again proved why he is considered one of the best strikers in the football world. The way he beat the two Atletico defenders was just amazing to watch, even for a hater.

Argentine Sensation Lionel Messi doubled the lead on the 33rd minute as the spectators were the witness of another stunning screamer. It was the 30th strike of the season for his club for the Argentine captain. The 29 years old footballer who won the Ballon d’Or for the record 5 times had scored 38 goals last season and this season he is just 9 goals away to surpass that with plenty more games still remaining. The first half finished with the 2-0 advantage for the touring side.

In the second half, Atletico’s French super star Antoine Griezmann put one back to the opposition’s net on the 59th minute with a brilliant header and the match finished 2-1 as no more goals were scored after that. The two hot favourites will meet once again in the second leg in the cup semi final at the Camp Nou on 7 February night. Atletico Manager believes that his team still can make it to the final, he expressed his thoughts at the post match press conference.