FC Barcelona, the most successful football club of the last decade, have once again proved why they are considered the best football team in the world. They have displayed a totally outstanding and outrageous performance to knock Paris Saint Germain out of the UEFA Champions League 2016-17. It was quite unbelievable for the football world and even if you are a Barca fan, it would be such tremendous for you to believe. The comeback has been labelled as the “Best UCL knock out comeback off all time” by the commentators. The MSN and Co. proved that nothing is impossible for them in a football pitch.

The Spanish champions hosted the French champions in the 2nd leg of the UCL Round of 16 match at the Camp Nou on the Wednesday night. The Ligue 1 hot favourites had got the better of their counter parts in the very first leg at the Parc des Princes and their 4-0 victory had almost sealed the next round for them. But the team from the France’s capital were sincere about Barca’s strength and their Italian midfielder Marco Veratti completely admitted that in the pre match press conference. 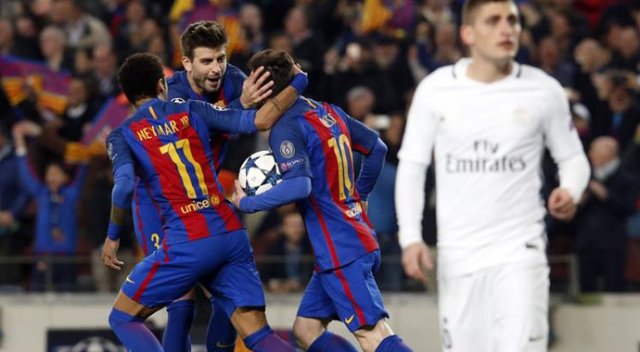 Luis Suarez opened the scoring on the 3rd minute of the match to give his team an early lead and most importantly the confidence that they can do it. The Uruguayan is known for making the best use of the chances and once again he did the same. Barca got their second of the night just 5 minutes before the half time as PSG’s young defender Layvin Kurzawa unfortunately put one into their own net and French side’s huge advantage was cut half as the aggregate became 4-2 at the break.

The Blaugranas got a good start at the second half as their Talisman Lionel Messi scored from the spot kick to make the aggregate 4-3. But Edinson Cavani’s superb strike made the line 3-1 and Barca had to score 3 more to qualify and it all seemed finished for the Catalans until the 87th minute. With less than 3 minutes remaining of the normal time Neymar scored a brilliant free-kick goal. The Brazilian was not done yet as he scored another goal, this time from a penalty kick on the 91st minute and Barca had the aggregate equalled at 5-5, but PSG were edged ahead because of that away goal. But the night was only for Barca as Sergi Roberto scored the decider and the most important goal of the clash on the very last minute and Luis Enrique, his lads and fans will certainly never forget this victory as they are now the part of the history. After 180 minutes of exciting football the result was decided at the very end and that’s the beauty of this most beautiful game in the planet.