Barcelona set their next target  to chase Borussia Dortmund forward Christian Pulisic. According to reports the Barca boss Luis Enrique keen to hijack the teenager in next transfer Windows. The La Liga giant are planning to scout the youngster in their side.

The Spanish publication Mundo Deportivo reported that how much Enrique’s side waiting for the USA professional. They revealed that the nature of Barcelona’s interest is unclear but they are very interest about the teenager. 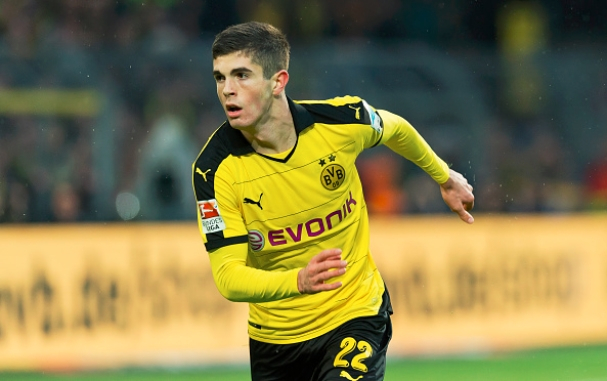 Dortmund coach very disappointed for Cristian’s perform. It was the third consecutive draw in the Bundesliga side. Hopefully they planning to sell him next windows.

This news make Barcelona more happy. Barca is team who always try to build the young talent future. The five times Champion league champions already have the most powerful forward in their side. Yet they are desperate to pick the young attacker in the next.

Messi, Neymar, Suarez still playing there then why they so desperate to take any other forward it is the normal question for all. Actually Enrique wanted to set an alternative forward who could take the place of three striker in the absence of them.

But this is the main problem for every striker they did not interest to join Barcelona. They do not want to sit on the bench for an uncertain period. But the American forward yet not made any comment. This season the Catalan side tried hard to chase Valencia playmaker Paco Alcacer but they could not succeed in their mission. And finally the windows has been closed. They also sanctioned Munir El Haddadi on season long loan this Summer.

Now the Catalan giant want to set the perfect match for the side. The coach think Pulisic has the quality to fit on the side. His creativity ability such a mindblowing at all. His performance just like an experience player and can be combined easily with Suarez, Neymar and Messi. So let’s see what happened and which will be their next destination. To get update keep eyes in our side.