Barcelona midfield warrior Rafinha has been ruled out for 4 months with a knee injury. The Brazilian had a long-term knee problem and finally had an operation in his injured knee on the Friday. It has been confirmed that the season is over for the Brazil international as the player will miss the rest of the season after undergoing the surgery.

Barcelona have reached the Copa Del Rey final, are currently at the second place in the league table and will face Italian champions Juventus in the UCL quarter-final round to qualify for the semifinal. So the Catalans are at the very crucial period of the season as a lot of serious matches are waiting on their way and the absentee of one of their regular midfielder will certainly hurt them a lot. 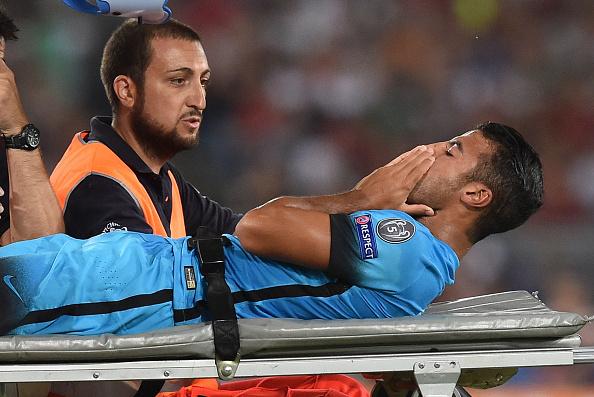 The Sao Paulo born footballer is tied with the Blaugranas since his childhood as it is his youth club too but couldn’t actually settled his place in the main team before the start of this season but this ongoing campaign changed his fortune as he was one of the most regulars to be picked. He has appeared on 28 occasions across all competitions for the Blaugranas this season and have managed to put the ball into the net 7 times for his team. He was specially a favourite weapon for Luis Enrique after the manager had to switch the formation into 3-4-3 after the heavy defeat against French Ligue 1 side PSG.

The 24 years old footballer was forced to go off the field during the away game against Granada. He left the field just on the 17th minute of that clash and also missed the very next game against Sevilla where the Catalans claimed a 3-0 victory over Jorge Sampaoli’s club. Rafinha also missed the majority of the last season for this very same problem and will be out for the remainder of this season.

Barcelona will face Malaga in their very next league game on the Saturday night before visiting the Juventus Stadium 3 days later. The second leg will take place 8 days after the first one and this is going to be the most vital stage of the campaign, so the fingers will be crossed that no more injuries happened in this period. Rafinha made his national team debut for Brazil in 2015 and played 2 games for the 5 time world champions since then and managed to get 1 goal for his country. Although he represented Spain in his youth.