La Liga champion Barcelona near to set forth the extension deal with goalkeeper Marc-Andre ter Stegen. The Spanish giants were ready to sell him to English Club Man City for  £67 million. Barcelona sold another goalkeeper, Claudio Bravo to Man city ahead of Summer transfer deadline. They also willing to sent him in the same side. Stegen is a very talented stopper and Barca have taken the decision to extend his contract

Stegen was very close to sign contract with the Premier League club and Barcelona also gave permission to make the move. But the has been not come to complete. As we know the transfer window has been closed so in is an undone deal over the season. 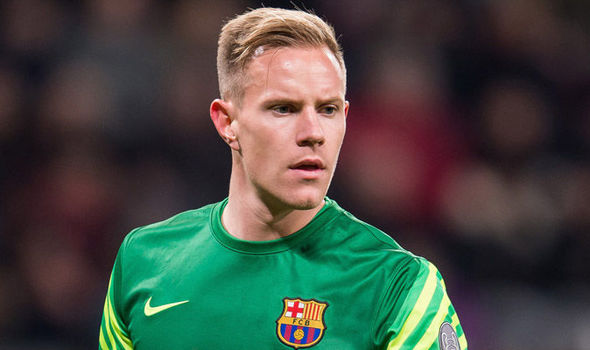 Barcelona has signed the Dutch goalkeeper Jasper Cillessen who played for Ajax. The deal for the Dutchman sealed with £12 million.  Barca are planning to set Jasper Cillessen for permanently. Ronald de Boer the former Barcelona playmaker also think the Ajax goalkeeper is really worthy of this post. Jasper becomes the fellow countryman. The command Cillessen would be the first choice for Barca goalkeeper post.

The 46 years gave free advice to new signing Dutchman. According to Mail report in Barcelona he could learn a lot of things. He also told in this side he got the chance to sprout. Boer added that  Cillessen is not a rookie and as human he would be taken time for establishing the side. It will be not quite easy, even it can be very hard. But the goalkeeper always needed to keep patience.

Barcelona do the absolute right decision by signing Jasper in the Summer. He was dealt for upcoming five years which will expire in the year 2021. Cillessen is very hard working guy and consist the quality to face any kind of problems. He has great experience how could handle the game. He would be a leading goalkeeper someday.

Now the question if Cillessen confirm for the goalkeeper post what about the Steegen. Who will perform permanently for the club. The German professional is still away three years to go his veteran contract with the La Liga giant. In that situation Barca willing to extend his contract again. But the extension period yet not submitted. Messi, Suarez and Ivan Rakitic is under construction for expanding contract deal. After closing the Summer transfer window Barca coach opening to expand deal with their own boys. Keep follow us to get update.