Lionel Messi, Neymar, Luis Suarez all 3 Barca superstars were back in action for the first time after the Christmas and the Catalan fans would have thought that they would start from where they finished before the Christmas but all their dreams went to vein as their loving club Barca got defeated in  their very first game in this new year.

The last time Barcelona had played, was on December 21, 2016 against Hercules in the Copa Del Rey 16th finals and that too was almost Barca’s second team as the MSN trio was rested for that easy fixture and they still managed a 7-0 win on that occasion. The last time MSN were in action before the Bilbao clash was against Espanyol on the December 18, 2016 in their derby match in the La Liga. After the long term vacation of almost 2 weeks the superstars were back on the pitch but had to face something unexpected. 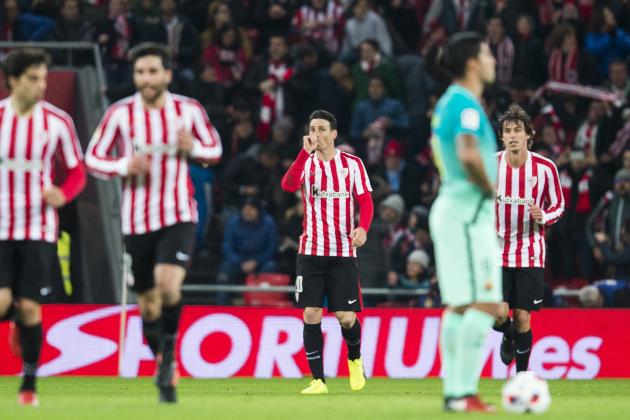 The defending Copa Del Rey champions squared off with their league rival Athletic Bilbao in the first leg of the Copa Del Rey 8th final at the Estadio San Mames Barria on the Thursday night. The hosts utilized their home advantages completely and secured a 2-1 victory over the current La Liga title holders.

Ernesto Valverde’s men were at the top of their form on the Thursday night. They displayed some good attacking football from the very beginning of the game. 35 years old Spain international, Aritz Aduriz opened the scoring on the 25th minute of the game. The assist was provided by the former Atletico Madrid midfielder Raul Garcia. It was the 13th goal of the season for the Bilbao talisman. Last season the Spanish goal machine netted 36 times for his club. He has carried that form to this season too. Spanish attacker Inaki Williams doubled the lead for the hosts just 3 minutes later of the first goal and the home side supporters from the gallery roared in joy. The first half finished with the 2-0 advantage for the home side.

Barca’s Argentine superstar Leo Messi pulled one back for the visitors on the 52nd minute of the game but that was not enough to avoid the defeat as they failed to find the net after that occasion and left the field with a 2-1 defeat. Referee David Fernandez Borbalan showed two red cards in the closing minutes of the game as Raul Garcia saw his second yellow on the 74th minute of the game. Ander Iturrapse followed his team mate’s footsteps as he was sent off just 6 minutes later and the home side had to play with 9 men for the last 10 minutes but Barca still couldn’t manage to score anymore. They will face each other in the 2nd leg at the Camp Nou on January 11.