Barcelona are flying high in the La Liga as they are at their ultimate best form in the Liga BBVA with a sparkling run of form. They have thrashed a visiting Sporting Gijon side with a massive 6-1 victory as they have now won 5 league games on the trot and has increased their unbeaten run in the league to 18 matches. The Catalans who had just tasted defeat twice in the league this season out of their first 25 fixtures but the very last time the 5 times UCL winners had lost a game in the La Liga was back in October against Celta de Vigo.

Although the Blaugranas are on the verge of getting knocked out from the UEFA Champions League after a 4-0 defeat against PSG at the first leg clash at the Parc des Princes. But they are not going to make that kind of mistakes any time soon in the league and their recent forms in the top tier competition of the Spanish football, indicates that clearly. 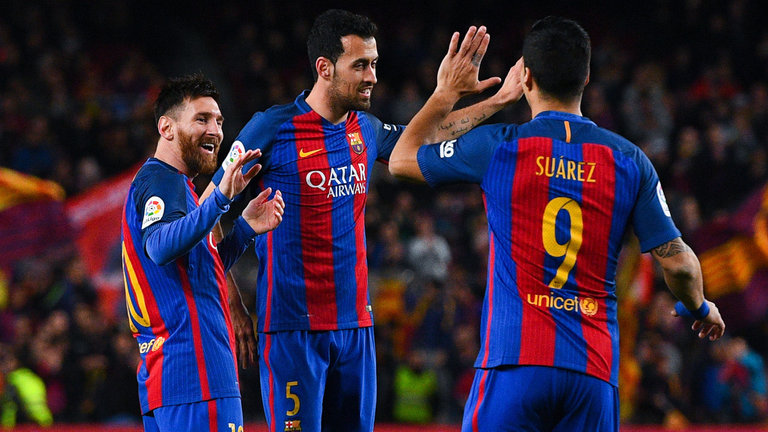 Barcelona hosted Sporting Gijon in a mid-week league clash at the Camp Nou on the Wednesday night. The inform striking trio and their team mates didn’t score less than 6 times on this game as the all 3 super star Messi, Neymar and Suarez have been able to put their names on the score sheet. Uruguayan sensation Suarez managed to get a brace.

Argentine captain Lionel Messi continued his good form and opened the scoring on the 9th minute of the match to give his team an early lead. Suarez doubled the lead just 2 minutes later. Carlos Garcia put one back to the Barca’s net on the 21st minute to make the line 2-1 but Suarez scored again, 6 minutes later and the first half finished with the 3-1 advantage for the home side.

Former Valencia attacker Paco Alcacer who has joined the club this season increased the lead further on the 50th minute with his 3rd strike of the campaign and Messi provided the assist on this occasion. Brazilian forward Neymar da Silva added his name beside his friends with a 66th minute goal and Croatian midfielder Ivan Rakitic made the line 6-1 with less than 4 minutes of normal time remaining in the referee’s clock.

Luis Enrique’s lads have moved to the first position in the league table with this victory although they have played one match more than their nearest rivals Real Madrid. They have got 57 points beside their names after the first 25 league matches.