Barcelona is the current La Liga and Copa del Rey champion and at the beginning of the new season, team Barca won Spanish Super Cup by defeating Sevilla. Sevilla went ahead at the beginning the failed to keep it. Barca scored two goals in two different halves and so, they started the new season with amazing victory. The apprentices of Ernesto Valverde won the Spanish Super Cup. 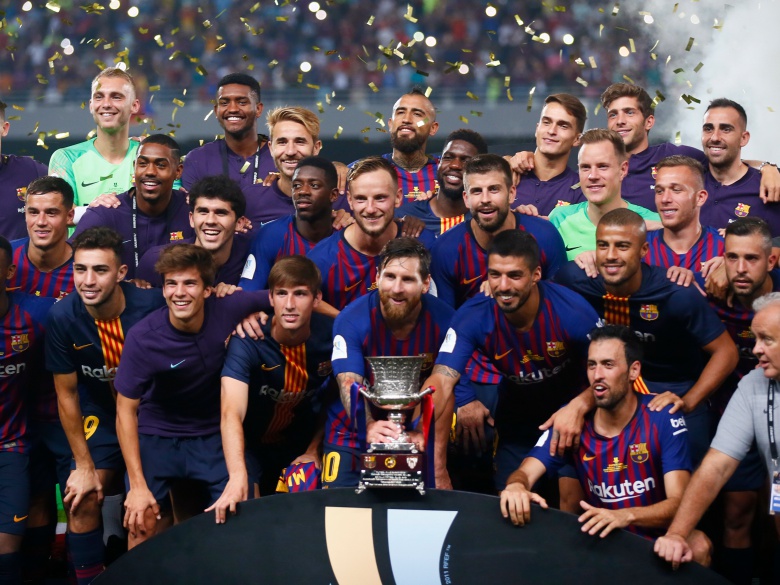 The match between Sevilla and Barcelona took place in Morocco at Grand Stade de Tanger ground where Barcelona won by 2 – 1 goals. At the first half, Pablo Sarabia led his team Sevilla ahead of Barca, but just before the end of first half, Pique scored a balancing goal and so, Barcelona returned to the game. And in the 2nd half, the match winning 2nd goal was scored by Ousmane Dembele.

In the Spanish home tournament, the champions of La Liga and Copa del Rey used to face against each other in Spanish Super Cup. But since last season, Barcelona won both tournaments and so, they faced the runner up team Sevilla in Super Cup. It was the first time when the Super Cup took place outside of the Spain. However, it was the first time where there were no two leg matches but the result has come through the one match.

At the opposite way for the game, Sevilla went ahead in the 9th minutes of the game. Muriel passed the ball to Pablo Sarabia and he found the net easily. Though at the first time, referee played flute for off side. But later though the replay, he one again played flute for goal. In 16th minutes of the game Lionel Messi took a speedy shot but stopped by the Sevilla stopper. Just two minutes later, Jordi Alba tried but failed.

In 27th minutes, Messi took a free kick where the head of French defender Lenglet missed only for a little. He arrived at the Camp Nou this season. In 38th minutes of the game, Luis Suarez got the ball in a danger zone but he failed to make a clear shot. In 42nd minutes of the game, Pique scored a goal and Barcelona returned to the game. Messi made a free kick which was stopped by the post but in return ball this defender did not miss one again.

In 78th minutes of the game, Lionel Messi made free kick from so close but the goalkeeper stopped that. But after that he was escaped by the French World Cup winning player Dembele. However, In additional minutes of the game, Sevilla got a penalty but missed and so, Barcelona won the Super Cup for highest 13th times.