Bundesliga giants Bayern Munich are marching towards another league title and they have gone one step closer to top tier league title of the German football as they have absolutely thrashed Hamburg with a massive 8-0 victory. Carlo Ancelotti’s side, who has just tasted only one league defeat this season have come back to the winning way after a 1-1 draw against the Hertha. The Bavarians who are aiming for their 27th Bundesliga title, are flying high in the Bundesliga table as usual and are completely dominating the league.

Bundesliga has been labelled as One horse race just because of this Munich based club. Bayern has alreday showed that how dangerous they can be when they are on song as they have completely kicked the English giants Arsenal out of the contest when the two historical clubs met each other, just a week ago at the Allianz Arena as the German side grabbed an unbelievable 5-1 victory over the Gunners. 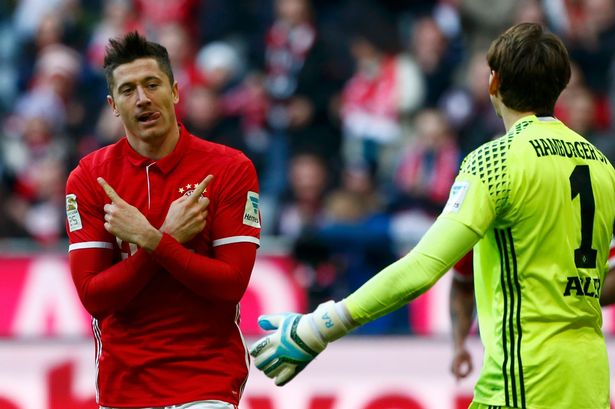 The German super powers were furious after drawing twice, out of their last 3 league games against Schalke 04 and Hertha BSC. They hosted Hamburg at the Munich Stadium on the Saturday night but showed no hospitality at all to the visitors as they netted no less than 8 times.

Chilean midfielder Arturo Vidal opened the scoring as he broke the dead lock on the 17th minute. Referee Bastian Dankert awarded the hosts a penalty and the Polish super star Robert Lewandowski made no mistake to convert the spot kick into the second goal for his team. He increased the lead further on the 42nd minute and the first half finished with the 3-0 advantage for the home side.

The 28 years old Poland captain completed his hat-trick on the 54th minute with his 27th strike of the season. The former Dortmund striker had netted on 42 occasions last season. Austrian versatile young footballer David Alaba scored a couple of minutes later to make the line 5-0. Then French attacker Kingsley Coman scored a brace within 4 minutes between 65th to 69th minute the score sheet seemed 7-0. Dutch veteran winger Arjen Robben struck the final nail on the Hamburg’s coffin with less than 4 minutes of normal time left on the ref’s clock and the Bavarians left the field with a comprehensive 8-0 victory.

Stern des Sudens are topping the table with 53 points from their first 22 league games and are looking for their 5th consecutive league titles. They will face Koln in their next league game, away from the home.