Bayern Munich the most successful club in the Bundesliga history thrashed 2nd ranked club Leipzig to make their position stable and strong at the top of the Bundesliga table. On the Wednesday night the two clubs from top of the table met in an important German league clash at the Allianz Arena. Both the team had the same number of points beside their names before the clash but the Bavarians were leading the table with better goal difference. Bayern and Leipzig both the teams had 36 points before the game.

The two teams squared off in a mid week league clash which was expected to be a cracker of a game as both sides were at the top of their form. But the host showed no hospitality at all to the visitors as they absolutely slammed them with an easy 3-0 win. Allianz Arena is a tough place to visit for any team and the Bavarians once again proved it that they are almost unbeatable at their fort. 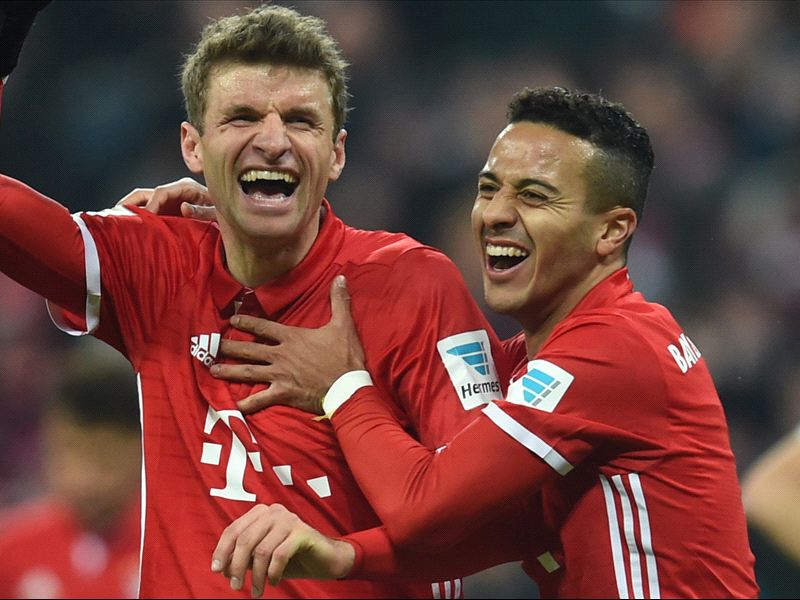 The Munich based club started with attacking display and dominated the game right from the very beginning. Spaniard midfielder Thiago Alcantara opened the scoring on the 17th minute of the match and the home side got the lead. Another Spaniard Xabi Alonso doubled the lead on the 25th minute of the game. On the 30th minute of the clash with 60 minutes left on the clock, referee Felix Zwayer showed a red card to the Leipzig’s Swedish midfielder Emil Forsberg and this almost summed up the result of the match. Then Munich’s Polish superstar Robert Lewandowski converted a penalty to score the 3rd goal of the game at the late of the 1st half. The first half ended with the 3-0 advantage for the hosts. But no goal was scored during the 2nd half and the hosts left the field with full 3 points.

Bayern Munich’s victory stabled their position at the top as they are now clear 3 points in front of the 2nd placed Leipzig. The Bavarians are now at the top with 39 points. Bayern have now won 5 matches in a row in the Bundesliga. But the Leipzig team was flying before the game as they won 9 out of their last 10 league clashes before this defeat. They had only lost once out of their last 10 league games that too was a narrow defeat against Ingolstadt away from home.

Bayern are the most successful club in German football’s history with 26 titles. They are now chasing their 27th league title which will also be their 5th consecutive Bundesliga title if they manage to win it this time too. The last time any team managed to win the league outside of Bayern was Borussia Dortmund, back in 2011-12 season.