Former Borussia Dortmund striker is currently under contract with German champion Bayern Munich where he made agreement with them in 3rd January, 2014 for five years long. According to the deal, the contract will valid till 2019. At the end of the 2015/16 season where there are still three years left, the Bavarians are willing to extend the deal till 2021. They are now working on it. In the meantime, he has got offer from Champions League winner Real Madrid and according to the report, he is also willing to play with them. But, the Bavarians are not gonna let him leave where he is under contract with them. Real has offered his such crazy wages but the Reds are not able to give him such salary. 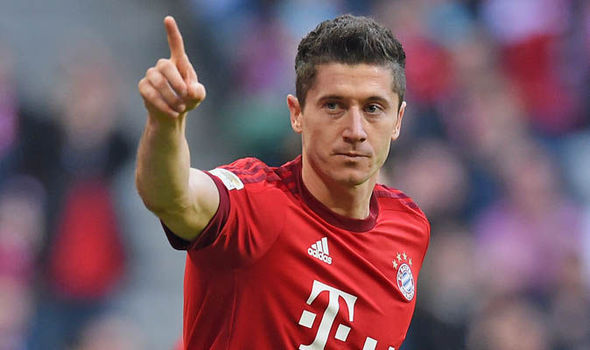 In last season with the Bavarians, this Polish international made 51 appearances in all competition and scored 42 goals which made him the top goal scorer in 2015/16 Bundesliga season. By doing such great job, the Reds are desperate to tie him and going to make a renew agreement where they are ready to give him more salary while he has still received €9 million per year. They will increase it but as per the report, this Poland national team striker has claimed €18 million wages per year.

Now, the Reds are in meeting with the agent of Lewandowski and they met with him several times. They both have agreed to renew the contract. They also want to increase the wages amount but not much as Manchester City and Paris SG. Rummenigge who is the chairman of the Reds thinks that they are paying a handsome salary but those two clubs are paying crazy wages. The Chairman has assured one thing that they will not sell him so early.

However, earlier this summer an obvious rumour spread that this 27 years old player has been linked with the Spanish giant and also he had just agreed to deal with them. But that news was smoke.

Robert is playing for the Poland national team since 2008 and till now made 81 appearances and scored 35 goals so far. He was selected Polish footballer of the year five consecutive times. With Znicz Pruszkow, he began his club journey where he made 59 appearances and gathered 36 goals. After passing two years with them, he joined Lech Poznan and next Borussia Dortmund. Till now, he played highest number of matches with the BVB which approximately 131 and scored 74 goals. From the BVB, he joined the German top tier in 2014 which was a free transfer and become one of the most inseparable player in the club now.