French renowned defender Laurent Koscielny is currently playing for the English giant club Arsenal. He was getting contracted with them since 7th July, 2010 with an undisclosed fee. Whereas, his contract will expire in next year so, many clubs are keen to recruit him. German top  club FC bayern Munich is one step ahead of them.

A news portal named Sunday Express revealed a secret that the Gunners boss Arsene Wenger does not want to lose his favourite defense weapon he is going to make a new extension deal with this centre half and they are ready to give £90,000 per week. He wants to keep his patriot for another season to create more opportunity to win the title of Premier League. 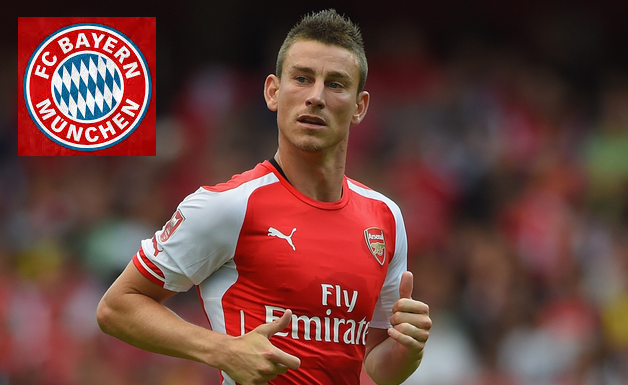 This 30 years old French Laurent Koscielny is best known for his clever and agile movement. His career began with Guingamp in 2004. He stayed with them till 2007. Next he moved to Tours and after that in Lorient in 2009. Team Lorient collected him in order to give €1.7 million for four years. He played for Lorient one season. He played 35 appearance with them and scored 3 most important goals so far. But they failed to keep him because Arsenal made an undeniable offer. Due to his remarkable activities in Lorient, Arsenal appointed him as a permanent centre back but the transfer fee was not revealed but approximately £8.45 million. He played with the Gunners total 180 matches where scored 15 goals. That is a great achievement for a centre back defender.

Koscielny was selected for French national team in 3rd February, 2011. Since then, he has played 36 matches for French international. He was also called UEFA Euro 2016 which has just finished. He scored his only one international goal against Scotland in a friendly match.

He is also announced as one of the great defender in Euro 2016. After finishing Euro 2016, Bayern Munich has taken desperate move to tie him under contract while he is only one year left of his current contract with the Gunners. Bayern Need hims to give support of their two newest addition named Jerome Boateng and Mats Hummels. Combination of this all three defenders would be very strong, according to the Bavarians manager Carlo Ancelotti.

Besides, this 30 years old defender has not unleashed any update news yet about his extension deal with the Emirates or leaving. But perhaps, if he will get better option then would possibly take it. Alongside Bundesliga champion, Manchester United are also keen to this centre back.