German giant Bayern Munich is ready to land Eric Dier from Tottenham Hotspur and they are also ready to place a handsome bid for this English defender. Eric Dier is current contracted with English club Spurs which is current second in command in Premier League. He is also a nation team player. As stated by the reports, Bayern Munich is ready to table £50m bid for the English defender where at the first time, Spurs rejected an approach from Manchester United. The FCB wants to test the English Spurs that how long they can keep this defensive midfielder. And Bayern boss Carlo Ancelotti wants to secure his back line before the end of transfer window. 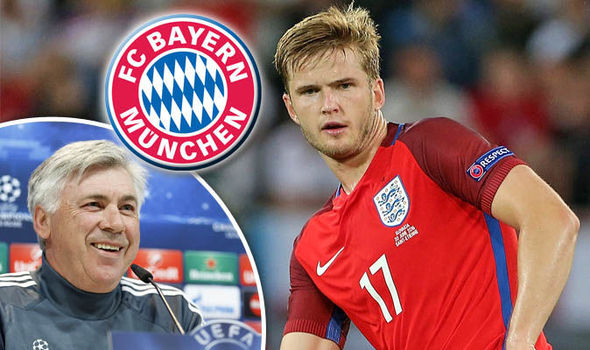 Eric Dier who is just 23 years old would be an easy option for German giant but Spurs which is passing this summer without buying, would be a major decision to sell Eric. But now the fact is mostly depends on this defender and if he would want to join with the German top tier after seeing a collapsed agreement from Manchester United, then perhaps Tottenham would sell him to the Bayern and find a possible replacement.

Mauricio Pochettino is the current head coach of Spurs who is tracking Everton midfielder but could not make any approach while seeing his high £50 million price tag. But if they would leave Erik to the German club, they will receive a huge amount which will be sufficient to land his target in this summer.

Ancelotti believes that Eric Dier would keen to join with the Bayern after Manchester United drama. And so, they are going to land the bid and wants to see their reaction over the fact. Spurs can take the option and would spend the money to land their long target Everton’s Ross Barkley.

Ross Barkley has just one year contract left with his current team Everton and team tried but failed to extend the player’s contract. So, there is a chance for the Spurs to buy him but before the end of the contract, the Toffees holds a buyout clause of this player which amount is huge. At the end of the deal it would drop and Mauricio Pochettino wants to take the chance.

Everton boss Ronald Koeman stated earlier that they placed a very good offer in front of the player but he refused to sign but added that he is looking for new challenge.

Eric started his professional run with the B team of Sporting CP and while playing with them, he spent a loan season with Everton as well. Later, he moved to the main team of Sporting CP in 2012 and played just 27 matches there. In 2014, he made a five years agreement with Tottenham Hotspur and his transfer fee was just £4 million. He has made already 101 appearances with Spurs and netter seven times so far.