Next season of every football league competition is knocking. Only few days in hand and therefore all the clubs are busy as well as their players. They are trying to recruit best players for next challenging season. Like many clubs, two English clubs Bristol City and Cheltenham Town are fighting among themselves to sign Austrian goalkeeper Ivan Lucic who is currently playing for the German giant Bayern Munich. In that case, City is one step close to the deal than the Robins.

Bristol City generally competes in 3rd tier of English football where Cheltenham participates in 4th tier league in England. But the most amazing matter of this two clubs are that Ashton Gate is managed by Lee Johnson and Cheltenham is coached by Gary Johnson where Gary is the father of Lee. Father and son are currently managing two clubs and at the same time, they have focused on the same stopper. And the question is, who will win the race between father and son. 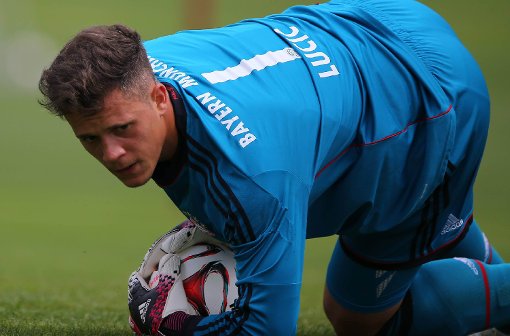 According to the report, a deal is just agreed between the Bavarians and Bristol City to land this 21 years old goalkeeper Lucic but they are not ready to reveal the transfer fee.

Nut before arriving at the Ashton Gate, he needs to pass medical test successfully which will be held within a couple of days. Basically, Lee Johnson keen to Austrian since long time and now they have got a chance.

Here is a new chance for this former Ried star to make his future and be regular with the first team whereas he did not get enough chance with the Bavarians and almost made just one appearance with them. The deal about his leaving to the Ashton Gate is about to a final stage. Within some days, he will be one of the Robins and start his new race with the new Championship tournament. Perhaps he would possibly play with the Ashton Gate in next pre season match of the City.

After finishing his youth career in 2012, Ivan joined in SV Ried in the same year. But, he just made one appearance with them and next he was given loan to Union St Florina. He stayed their a season and played 25 appearances. He joined the reserve team of Bayern Munich in 2014 and called to the main squad in 10th April, 2015 by manager Pep Guardiola. During this reserve period, he suffered an injury of sprained ankle.

As above stated statistics, it seems clear that he did not get chance to perform regularly but the Robins have a better plan with him. Finally, he would perhaps use his talent with his future club Bristol City.