Arsenal who are considered as the English premier league giants and are consistent performer in the most popular league in the world but their recent performances against Bundesliga champion Bayern Munich has labelled them quite as a small team. It was shocking to see the aggregate score card as a team of Arsenal’s caliber has conceded no less than 10 goals after the two legs against the Bavarians. Arsenal actually never had good memories against The Stern des Sudens and Arsenal’s rivals’ fans already had started mocking them after the UCL Round of 16 draw was drawn but almost no one could predict that the Gunners wouldn’t make any problem at all in Bayern’s way to go through to the next round. The London based side had no answer at all and they were beaten in a mammoth margin.

After qualifying as the group Runners Up, standing behind Atletico de Madrid, Carlo Ancelotti’s team were once again drawn to play against the Emirates based club, and their meeting to each other in the UEFA Champions League round of 16 in recent season has been mocked as “Better love story than Twilight” in the social media. Arsenal toured to Germany to play the very first round and were in a situation of bother after conceding 5 goals after qualifying as the group champions. 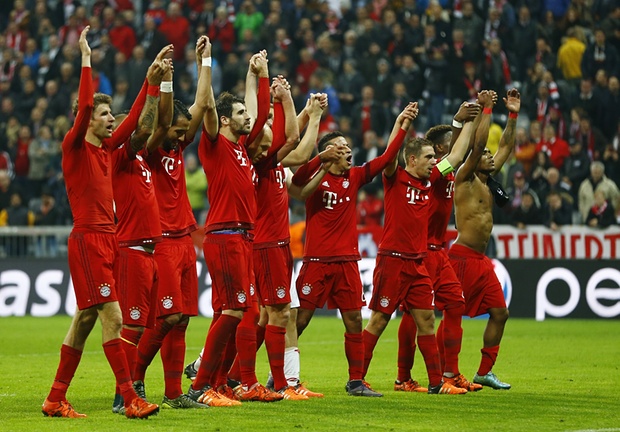 The second leg took place on the last Tuesday night as the Gunners hosted the German club at the Emirates Stadium, London. And you know what? The score line was once again very much same as the first leg. It was absolutely sensational from Robert Lewandowski and co. Walcott opened the scoring on the 20th minute to give the home side the lead and they went to the break with one goal’s advantage.

But the situation kept going towards the visitor’s way since the 54th minute as host’s French defender Koscielny saw a red card and ref awarded Bayern a penalty. Lewy didn’t make any mistake to level the line. Dutch winger Robben gave the visitors the lead on the 68th minute. Brazilian young gun Douglas Costa increased the lead 10 minutes later. Chilean midfielder Arturo Vidal scored twice in quick succession inside 5 minutes between 80th to 85th minute and his brace made the score card 5-1 in the favour of Die Rotens and they marched towards the next round with a mammoth 10-2 victory on the aggregate. The defeat has actually slapped on Arsenal’s cheek and they will have to find the answers of too many questions.