Bayern Munich is the German Bundesliga top flight and the current boss of the club is Carlo Ancelotti. The boss is passing very busy time in this summer because the transfer window is almost come to an ending point. But he has brought five players at the Allianz Arena in this window. He has been looking towards the Real Madrid winger Marco Asensio since long but could not bring him at their camp at all.

When this Spaniard was teenager, then he joined with the Spanish giant Real Madrid in 2014 but yet to spend any full season with the club. In his first two seasons, he spent loan period with two different clubs named Mallorca and Espanyol. But in this summer, he can hope to spend his career here. Because, he has shown some extraordinary skills in Spanish Super Cup against Barcelona where in both first and second leg, he scored goal and his team Real defeated the catalan club by 5 – 1 aggregation. So, he would not be so easily collected. 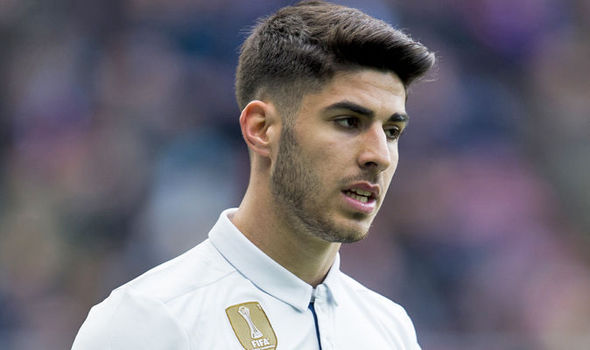 Bayern Munich wanted to sign him as their first place but now shifted their attention to their another player James Rodriguez. Marco Asensio who is still regarded as the wonder kid has finally presented his magic against their top rival Barcelona where James Rodriguez watched the match from the sideline. So, now this Colombian international has found himself as a surplus in the Spanish camp who is struggling for the match since last La Liga season.

So, this Colombian midfielder has finally arrived at the Allianz Arena where he will try to prove himself once again.

However, some Spanish outlets have claimed that The FCB wanted to wanted to land the Spanish winger Asensio at the first place but failed to do so, the picked James on loan.

The youngster Marco was wanted desperately by Carlo who scored against the FCB in last season of Champions League. According to the reports, Bayern was ready to table £72 million which was his release clause to finalize the agreement. But this Spaniard made things clear that he will not leave Spanish side. This 21 years old winger also has been linked with French side Paris Saint Germain this summer but yesterday this Spanish man rejected the possibility to move to the France.

Marco Asensio who started his career with Mallorca but not with their first team but was placed in B team. Later in the first team squad and after that Real Madrid took him from there for six years and the fee was €3.9 million reportedly.