Mohammad Shahid has sidelined for a knee injury. Now the injured pacer has been replaced by fast bowler Rubel Hossain. According to reports Bangladesh Cricket Board (BCB) named Rubel for the New Zealand series preparing camp. Due to lack of skills he was not in the team since few times.

The pacer has lost his place After two games in the series against Afghanistan. For low delivery he was kick out from the squad in the next matches.

The team chief selector Afghanistan  Minhajul Abedin was very disappointed for damn performance of the bowler. He termed that due to lack of bowling fitness the pacer considered to be out from the squad. And after that he was sidelined from the team.

Not only that he was not taken against England series. He is almost sidelined from the national team but In BPL he made his strong existence and proved himself once again. 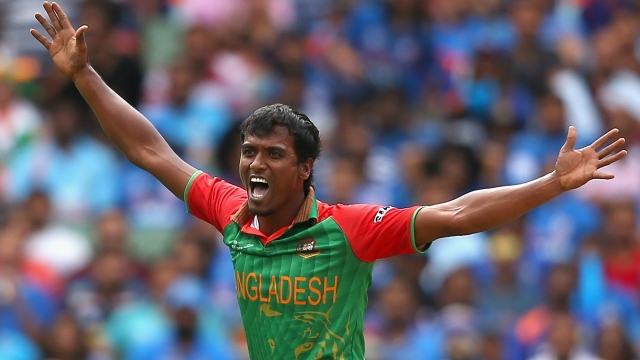 BPL widely known as Bangladesh Premier League is most favorite cricket tournament in Bangladesh. And Rubel hossain shown a brilliant performance in that. He plays for Rangpur Riders in the and picked out 15 wickets in 12 matches. The pacer gave the run average of 21.06. His best performance in the tournament embarked as 3/25.

The chief selector said on Monday, due to Shahid injury he has set out from the team and the place will be taken by fast bowler Rubel Hossain.

Saturday, 26th November when the pacer was fielding for Dhaka Dynamites against Comilla Victorians, he trying to save a boundary and got injured. He has taken to doctor immediately and doctor declared him as injured. The chief doctor Debashish Chowdhury advised to take rest him for a week. He also termed tha after a week they they again test him and then said something final about that.

But the Bangladesh cricket team have to go Australia on 9th and 10th December.  At the end of the camp they will be go New Zealand on 18th December. The chief selector has announced the name of squad for New Zealand preparing camp. Here the name of them.