West Brom’s English goal keeper Ben Foster has signed a new deal with the club. He has penned a two and a half year contract extension with the Baggies. It is a very big news for the Baggies’ fans before the Christmas as their number one stopper will now stay for a longer period.

The England international moved to the Hawthorns based club back in 2011 as a loaned in player from Birmingham. Then the move was made permanent just 12 months later as the Baggies signed him as a permanent player. Now the 33 years old will stay with the club at least until the summer of 2019.

Foster made his 150th appearance for West Brom in the 1-1 draw against Sunderland back in October. This season he has appeared in 17 matches so far for the club. He is yet to miss a premier league game this season. Foster has made total 161 appearances for the Hawthorns based club and kept 41 clean sheets. 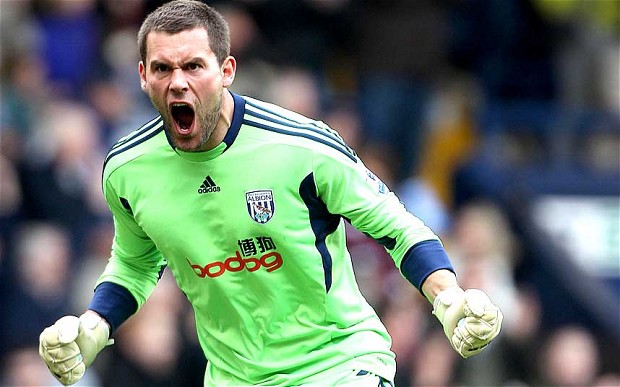 West Brom manager Tony Pulis told that they were delighted to extend Ben’s contract. Mr. Pulis applauds Foster and said that he was more than happy with the keeper’s performances in this ongoing campaign. Pulis thinks that the England goal keeper has set the standard and other keepers should follow him.

The keeper was spotted by Manchester United’s legendary manager Sir Alex Ferguson when he playing for Wrexham on loan from Stoke. He was loaned out to Watford and made 29 appearances for the Hornets in 2006-07. He played in 3 seasons for the Red Devils and featured in 15 matches.

West Bromwich Albion is currently on the 8th position in the premier league table with 23 points from the first 17 league games. They have won 4 out of their last 10 league clashes and are in comfortable position. Foster was in hot form for them and the Baggies fans couldn’t be happier with the big news coming out.

Foster’s next test will be against the Gunners when his team will square off with Arsenal in a league clash on the Boxing Day at the Emirates Stadium. Their last match of the year will be against the Saints, away form home right during the new year’s eve on December 31 at the St Mary’s Stadium. With the contract extension the 33 years old will be keen to continue his form for the Baggies. West Brom fans will be looking at him as the safest pair of hands for the Baggies do belong to the experienced English keeper.