28 years old Argentine star midfielder Nicolas Gaitan or simply Nico Gaitan is currently playing for the Portuguese club SL Benfica. He is now looking forward to his next deal with Atletico Madrid. Spanish club Atletico Madrid have confirmed the deal with Nico in exchange for €25 million to sign.

Nico Gaitan started his club career with Boca Juniors in 2008. In next, he joined Benfica in 2010 in exchange for €8.4 million which actually was a replacement. He played with Benfica for long six years where he totally played 252 matches and scored 41 goals so far. For his brilliant performance, Atletico Madrid have interested to tie him. As a result, they finally have made an agreement with Benfica as well as Nico where they are ready to give €25 million. 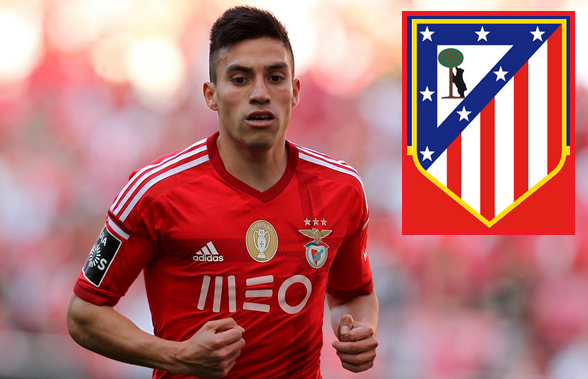 This attacking midfielder is currently stayed in United States due to the centennial event of Copa America 2016. After the end of the tournament, he will travel to Spain and then he will complete all procedures to move in Spanish club. And then it will be declared by officially.

Though, Nico Gaitan joined Portuguese club Benfica in 2010, but in 2014 he extended his agreement with the Eagles until 30th June, 2016. And also he has currently two years contract left with Benfica but in the meantime,  the Red and Whites have compromised with the Eagles about Nico where the have agreed that this Argentine attacker can join Spanish giant club.

Benfica though about the left deal with Nico but they also think that, after two years this Argentine star will go for free. Then they tried to make an extension about the agreement and Gaitan has rejected. So, based on that, the Eagles did not want to take a risk while they still have a chance to sell him in market. So, Atletico Madrid have come to the market to pick a play-maker for their own in this summer and have received the advantage by taking Gaitan.

Spanish club has offered much salary where the expected amount is €25 million but it is not officially announced yet.

Nicolas Gaitan played his inaugural match with Argentina national football team in 30th September, 2009 and has become one of the rising star of the team nowadays. His performance in Copa America Centenario is very charming though he did not scored any goal. In his two years career with Boca Juniors, he scored 12 goals by playing 66 matches.

This left footer dribbler will have to go through the medical exam to join the Spanish club in next July, 2016.