A hot game was there for the Serie-A fans on Saturday. Two Italian heavyweights AC Milan and Napoli came head to head at the San Siro, Milan. It’s one of the most awaited fixtures of the Italian football. AC Milan had not beaten Napoli in their last 4 meetings before the Saturday’s clash and once again Partenopei Gli Azzurris came victorious to seal their 5th consecutive win against the same opposition.

Maurizio Sarri’s lads started the match on a high as they got the early lead with just 6 minutes having passed in the ref’s clock. Lorenzo Insigne opened the scoring for the visitors. It is the 6th goal of the season for the 25 years old, in his 27 outings in the competitive matches this season. Last season the Italy international scored 13 goals. Dries Mertens provided the assist. Spaniard forward Jose Callejon doubled the lead just 3 minutes later to give the touring side a comfortable position and they were in the driving seat of the game. It was the 9th goal of the campaign for the 29 years old former Madrid winger. 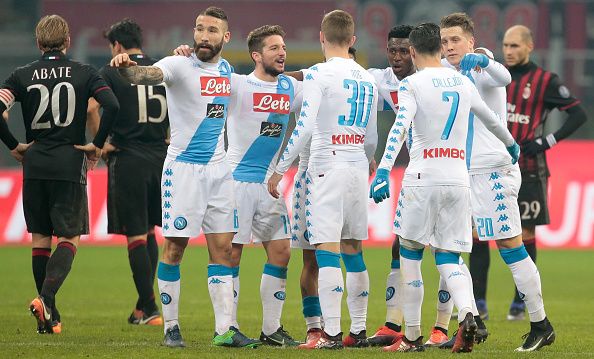 AC Milan put one back as Slovakian midfielder Juraj Kucka netted on the 37th minute to make the scorline 2-1. It was the 3rd goal of the season for the 29 years old. The first half finished with the 2-1 advantage for the visitors. But that was enough for the Blues as no more goals were scored in the 2nd half of the match and they got their 5th straight victory over the Rossoneris.

Milan had struggled a lot against Napoli in the recent past. They have just beaten the Azzurris only once out of their last meeting. Meanwhile the Naples based club has won 7 times inside the very same period. The other 4 clashes ended up as Draw. The last time the Diavolos won over the Ciucciarellis was back in December 2014, thanks to Jeremy Menez and Giacomo Bonaventura’s strikes.

Napoli is currently sitting in the 3rd position in the league table with 44 points from the first 21 gamews. Milan is on the 7th place with 37 points from the 20 matches. Juventus is at summit with 48 points and are looking for their 33rd league title. Napoli are unbeaten in their last 10 league games and have won 7 times in this period and are at the top of their game. It’s the second defeat for the hosts in their last 5 league outings and they have won only once in this period.