German giants Borussia Dortmund are back to the winning way after 3 matches on the trot without a single victory. Die Borussens got a comprehensive 3-0 victory against their league rivals Wolfsburg. Thomas Tuchel’s lads were keen to get back to the winning form as they faced a downfall against Portuguese side Benfica in their latest UCL clash and are now in a must win situation when they will face their counter parts in the 2nd leg clash and their form against Wolfsburg will certainly encourage them.

The Black and Yellows hosted The Wolves in a Bundesliga clash at the Signal Iduna Park on the Saturday afternoon. An own goal gave the hosts an early lead on the 20th minute of the match. The visiting side’s Dutch defender Jeffrey Bruma, who has joined the German side from PSV this season, put the ball on their own net. The first half finished with the 1-0 advantage for the home side. 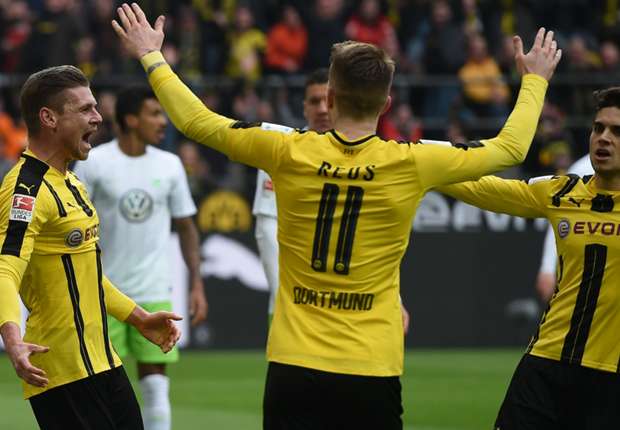 Tuchel’s team started the second half on a high as they got their 2nd goal of the game with less than 3 minutes having passed on the ref’s clock at the 2nd half. Polish full back Lukasz Piszczek doubled the lead for his side. It was the 6th strike of the season for the 31 years old. The right back had scored 2 goals last season for the same club.

French attacker Ousmane Dembele increased the lead further on the 59th minute and Piszczek once again was directly involved with the goal as he provided the assist on this occasion. It was also the 6th goal of the season for the former Rennes forward who had netted on 12 occasions last season for the French club. The 19 years old continues to impress the fans and the spectators as he carries on his sparkling form. Former Dortmund midfielder Jakub Blaszczykowski came to pitch for his new club to face his former side, replacing Vierinha with just 15 minutes left of the normal time. The former Poland captain is still looking for his first goal in a Wolfsburg shirt after joining the club on the last summer transfer window after being part of the BVB for no less than 9 seasons.

Dortmund are currently sitting at the 3rd position with 37 points from their first 21 league games and Wolfsburg are at the 14th position with just 22 points from the very same amount of game as their counter parts. Bayern Munich topping the table with 50 points and marching towards another league glory.