Borussia Dortmund Superstar Marco Reus comes back in style after a long term injury. The German forward scored a brilliant Hat-trick against Legia Warsaw on his comeback. The spectators of the Signal Iduna Park saw an history creating match on Tuesday Evening. The German giants won an insane game of 12 goals.

After the ending of the game the scoreline seemed odd & quite hard to believe. Reus came back with a bang & the scoreline was 8-4. The match between Dortmund and the current Polish champion Warsaw, produced the most number of goals in a single match, in UEFA Champions League’s history. The historic match between Monaco & Deportivo La Coruna in 2003 produced 11 goals, one less than this one.

Dortmund Coach Thomas Tuchel made 9 changes to the playing XI to face Warsaw. Only Marc Bartra & Matthias Ginter who played in the Dortmund’s very last match, against Bayern Munich, retained their place. All the other big names were rested. 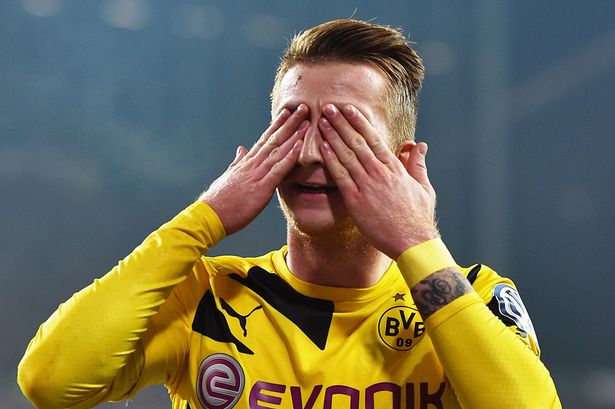 It was an expected win for Tuchel’s side but surprisingly the Polish side opened the scoring. On the 10th minute of the game, Aleksandar Prijovic gave Legia Warsaw the lead as the Catalan defender Marc Bartra made mistake in the Dortmund defence. But Dortmund took only 7 minutes to reply as Japanese playmaker Shinji Kagawa levelled on the 17th minute. The Blue Samurai’s attacker scored again one minute later. Then Turkey midfielder Nuri Sahin made the scoreline 3-0 just 2 minutes later, on the 20th minute of the game. Then Warsaw scored on the 23rd minute & made the scoreline 3-2. Then the Reus-Show started. The German superstar started with an assist as Ousmane Dembele made it 4-2. Reus scored his first goal on the 32nd minute & the scoreline after the first half was 5-2.

The 27 years old sensation came back after 185 days & displayed a brilliant performance. Although the opposition was a weaker one but Reus looked spry through the whole 90 minutes. At one stage of the game, Dortmund Boss wanted to take him off but Reus signalled towards the dressing room that he wants to stay in the field. Reus was delighted to come back in great style & expressed his happiness after the game. The fans were very much happy as the local boy of Dortmund overcame his muscular issues which even cost him an appearance for the Germany national team in the UEFA European Championship 2016.

The veteran goal keeper Roman Weidenfeller stood between the post due to the absence of regular keeper Roman Burki. Reus & his team is now set to face Eintracht Frankfurt on Saturday’s Bundesliga clash. Thomas Tuchel’s team is also in the top of the UCL group table with 13 points & have already secured place in the round of last 16.