Both the Manchester giants drop points in their own games. Manchester United ridiculously dropped points against Swansea City and was followed by their town rivals Man City. It was a day of some big shocks as both the teams from a football loving town dropped the vital points in the crucial stage of the league. They would have to suffer a lot but the pain would be less now considering the 2-0 defeat of their nearest opposition Arsenal against a sublime Tottenham side. United and City each grabbed a point but the Gunners couldn’t even take a single point back to the home from the White Hart Lane.

The Red Devils hosted the Swans at the Theater of Dreams on the opening game of the day. Mourinho had to made some forced changes considering some big injury absentees as some of their big stars were ruled out due injuries. But they got a good start as a successful Wayne Rooney spot kick gave the home side an important lead at the end of the opening half. But Icelander sensation of the Swans, spoiled the party as he equalized on the 79th minute to earn his club a point from this tough fixture. 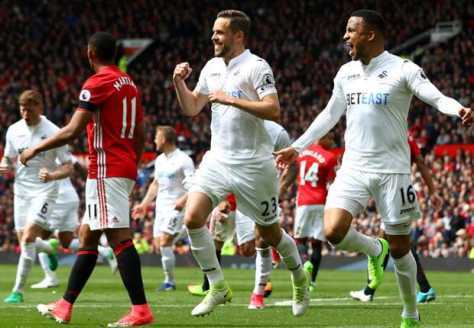 Pep Guardiola’s lads had a good chance to increase the point difference between them and United but they too followed their town rivals’ foot steps. Spain international Alvaro Negredo opened the scoring at the Riverside Stadium on the 38th minute to give ‘Boro the lead. It was the 10th goal of the season for the former Valencia striker and it was certainly a special goal for him as it was against his former club. The first half ended with the 1-0 advantage for the hosts. Referee Kevin Friend gifted the Citizens a penalty and Sergio Aguero didn’t make any mistakes to level the line from the spot kick on the 69th minute. English full back Calum Chambers scored the second goal for Middlesbrough but Gabriel Jesus equalized for the last time in the match with less than 5 minutes of normal time remaining on the ref’s clock and the Citizens left the field with a point.

Man City is currently sitting at the 4th position in the league table with 66 points beside their names from the 34 EPL games and United who have played the same number of games as the Sky Blues, is at the 5th position and are just a point behind. Arsenal is occupying the 6th spot.