The hottest African Cup of Nations tournament going to be hosted in Gabon and the Egypt boys are very hopeful to grab the title this season.  The team striker Marwan Mohsen mentioned that their country need not fear to any other country.

The consuming group of Egypt very tough but they believed that they able to come over the group round sensitively. In group D they have to face Ghana, Uganda and Mali.

According to reports the Pharaohs team presently existing in training camp in Cairo. And their training session spending with full volume. Their performance is so good that they can not afraid to anyone. Specially the squad which select for tournament.

They are very confident in their performance. As they rushed Nigeria and Ghana in previous. After defeating the biggest team like them they earn more confident and now they consisting not fear characteristic. 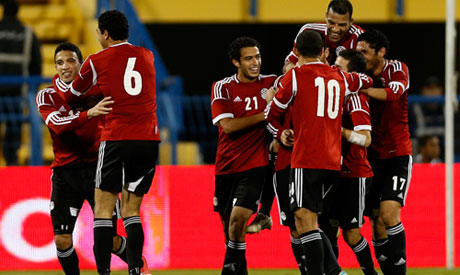 Football Egypt is always be a very good team. They became the seven time champions of AFCON competition. This time they expected to grab the title for eighth time.

Mohsen who play for the club Al Ahly recently back to action after suffering from injury. He has been suffering injury since some time but now returned to squad and going to lead the front line in AFCON competition.

After winning aver Tunisia their confident level rise on very high. At Cairo they had played a friendly where Tunisia trusted by 1-0 score against Egypt.

Because they believed that Tunisia is very tough team. Their all staff and players are very talented and well prepared for the competition. And to defeat that type of team really the matter of honor.

Mohsen scored the goal but he did not want to take the credit alone because he believed that the achievement has been possible for all efforts.

Egypt has been absent from the previous AFCON competition disappointed fans very much. Last time they took part in the competition in 2010. Last three season they were far away from the competition. So this time the fans are very excited to show the performance of the team.

The existing squad of Egypt is well experienced and the guys know the policy how to deal with the opposition is tough position. This time they back to truck to grab the title.

Though it is not good for any team to hold over confident tendency. But we wish all the best for them.