The Socceroos aka Australian national football team will go to participate in the forth coming Confederations Cup which will be going to held in Russia having a 4-0 loss against Brazil at their home on their back.

Brazil started awesome as the double goal scorer of Brazil Diego Souza scored his maiden International goal for Brazil national team and gave a lead to their team by 1-0. And look at the scorecard! It was only 12 seconds on the clock! Just amazing. He scored the his maiden and that night’s first goal when the clock was ticking at only 12 seconds at Melbourne Cricket Club, Australia before the 49,000 Australian crowd. Then he scored another and Thiago Silva and Taison finished the game off with their goals. 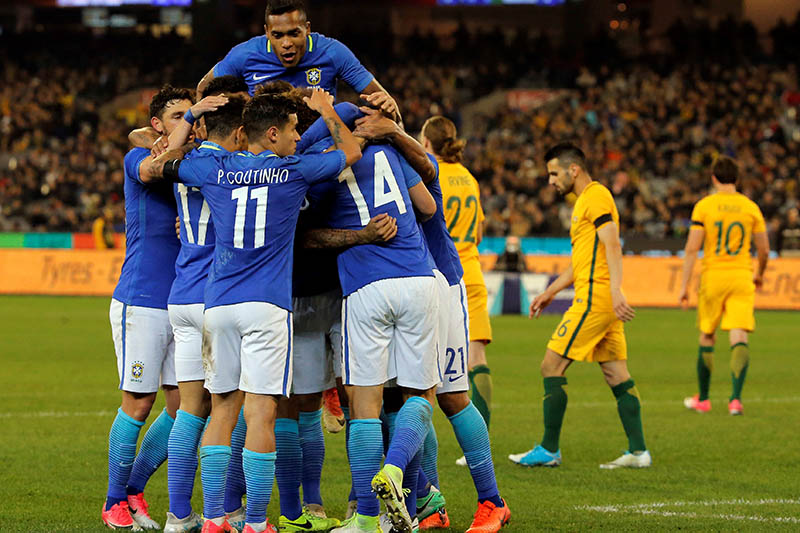 Brazil forward Diego Souza wrapped the victory up for their team as he scored for the second instance in the added time of the game with a header after Thiago Silva scored the second goal  of the game in 62nd minute within a crowd in the Australian goalmouth and Taison who landed in the field being a substitution scored the 3rd goal of the match in the 75th minute which was a completely team goal.

Australia entered in the ground with a heavy round of applause from the crowd as they have kept their hope of a straight fourth world cup participation campaign as they have beaten Saudi Arabia in the last week. They will play in the group B in the upcoming Confederations Cup where they will have to face the current world champion and four time FIFA champion Germany which will be very very tough.

But, the 12 second goal from Diego Souza made the Socceroos rumbled as they seemed not to find what to do next as it was a unexpected and crushing blow to Ange Postecoglou’s side and they lost their game. And they were just left to see the next heavy destruction as Brazil scored another three goals and simply outclassed them y their play and Australia had nothing to complain about as they themselves had missed several goal-scoring chances.

Australia’s former coach Holgar Osieck’s departure’s prelude was the last time when Brazil and Australia met which was at 2013. Brazil beat Australia 6-0 and their coach Holgar Osieck was sacked immediately and  Ange Postecoglou had been appointed as the new coach of the socceroos and what a similarity between these two coach’s first meeting with Brazil. They both have lost to Brazil in a very huge margin.

He also said that, from their point of view the game was about preparing their team within a one week time a they had another game against Saudi Arabia just one week before the game against Brazil.

He indicated that he thought to give some players some game time which was important and he did exactly like that.

Brazil who had lost to their arch rival Argentina in a game which was held at the same ground four days ago, was completely a different team against Australia. They dominated the socceroos from first minute till the last. \

Brazilian boss Tite said he is happy of their defense line and also said that he is pleased to see the players helping each other in the field.