Brazil legend Pele hopeful for winning sixth World Cup trophy. Last Monday reportedly proclaimed that Brazil being the favourites to grab the title of World Cup for sixth time. He also added that last four year they have prepared themselves for the tournament and this time they back to their form.

And yes we can see the changes clearly in the WC qualifier matches. It was really horrible to remind the last championship when the five time champions were dismissed by Germany in 7-1 goals in the home ground.

But Tite’s joining proved well for the side and the Brazil legend Pele, believes that the new coach trained the team very well and they are absolutely ready for the World combat. The 77 years old man also believes that their performance will force the fan to forget the last season painful memories. The boss announce the team has the most favourite participants of the competition. 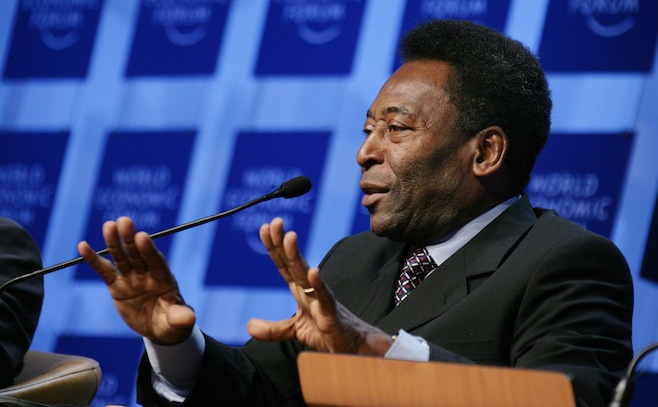 At the opening ceremony of the Rio de Janeiro league Pele also announced that Brazilian and the fans of the team must believe believe the side as the favourites. Brazil become the who bear a different identity and nobody decline the universal truth. Lackings of right direction they lost their goal but this time they confident and it’s really visible. As we know the team became the first one among of South American region who reached the tournament.

However, the team holding World’s best footballer like PSG star Neymar, Barca new signing Philippe Coutinho and also many others. Last World Cup the team were also holding the best footballers in the world but the team was unable to prove themselves.

The 77 years old legend accused that this time the team able to give confidence the fans. In his word if it will analysed only three footballer who are most favorites that are Messi, Ronaldo and the Neymar and among of them one belongs to Brazil. So his hope so high for the side.

Pele, being the most experienced footballer in all time. For his time Brazil able to grab the title for three times in 1958, 1962 and also 1970. The man scored more than one thousand goan in his whole football career. For his outstanding performance he called magician of football. In modern era of football very few guys presence in that line.  In recent time we find the three name that Argentine Lionel Messi, Portugues forward Cristiano Ronaldo and Brazilian Neymar Jr.