Brazil getting preparation to face harder team like Spain-England in the World Cup clash. In the World Cup Russia, Which going to take place on the next year June, Brazil included in relatively easy group but the coach is very careful about preparing for the team.

Tite is very talented guy and obviously great for Brazil. As we saw in the last  World Cup, their condition was so dull but they back to their motion and this being possible only for Tite. The dynamic coach said that they are preparing for fighting with the world-class teams like Spain or England. This case he could not  take any risk and this time his dream is so high because this time the time in the full form to reduce the past blemish. 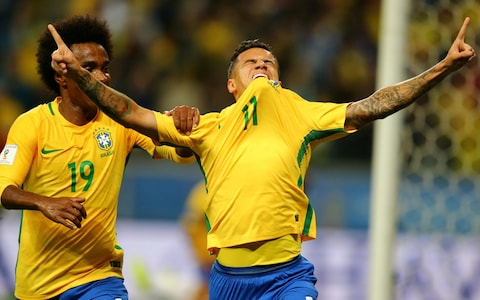 According to Friday’s draw Brazil considering ‘E’ group along with Switzerland, Costa Rica and Serbia. However, the opponent is  the attitude of Brazil team will not be changed will, as it said the coach.

Tite clearly mentioned that Things will be the same of any opponent country. They will use same strategy for Spain, England or any other team like Switzerland, Serbia and Costa Rica.

He also added that He will be controlling what is in his reach, his only thought to spend the energy in it; Which will further unite and develop Brazil team.

Brazil has played very well in the qualifying round.  Five-time world champions are the first team to qualify for the World Cup Championship. In the qualifying round of the South American region, they finished the round with the 10-point gap from nearest rival. Not only that they became the unbeaten team in the 17 matches.

In the Russian WC competition they putting them as the favorites team. However, the 56-year-old Brazilian coach also looking forward opportunities to improve. He almost success in his determination but his dream is to win the crown of WC.

The coach accused that they still need to improve on the strategic side. Physical preparation must be adjusted to reach the best condition of the players. The team is still under construction.

He also added that they also need to work on the mental aspect to deal with pressure and expectation. They are favorites But there are others to compete them.

Brazil will start the World Cup clash with a match against Switzerland then Costa Rica and the group’s last match will be played against Serbia.